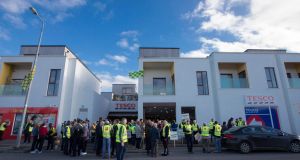 Politicians in all parties have sharply condemned a suspected arson attack on a car outside the house of a Sinn Féin TD who spoke up in support of a controversial centre for asylum seekers in Co Leitrim.

Martin Kenny, a TD for Sligo-Leitrim, spoke last week in support of a centre for asylum seekers in Ballinamore, Co Leitrim, which has been opposed by some local people. Early on Monday, Mr Kenny’s car was apparently set alight outside his home. Gardaí are investigating the incident.

Taoiseach Leo Varadkar said it was “an attack on democracy in itself”.

And Sinn Féin leader Mary Lou McDonald said it appeared to have been a deliberate and targeted attack on Mr Kenny.

A Garda spokesman said investigators “are in the early stages of this investigation and have not predetermined any motive in or out at this time”.

However, a Garda source said Mr Kenny’s support for asylum accommodation in Ballinamore and a subsequent death threat “form a definite line of inquiry”, but said there is no evidence as yet pointing towards a particular individual or group.

Last week, Mr Kenny said that “some people in this country peddle far-right ideology” during Dáil exchanges on asylum seekers. Later, he said he had received a death threat and a number of vile messages.

Commenting on the death threat, he said: “I expect someone who is going to do something does not text you first to tell you they are going to do it, so I am not taking it too seriously.” Mr Kenny could not be reached for comment on Monday.

The attack has been condemned “in the strongest possible terms” by those protesting against plans to accommodate 130 asylum seekers in the town. The protestors have argued that 130 asylum seekers is too many in a town with a population of 900 but have said they would accept a “proportional” amount.

Last night, parish priest of Ballinamore Fr Sean Mawn said it was time for local people to review their decision to have a round-the-clock protest. And he condemned the apparent arson attack on Mr Kenny’s car as a “despicable act which has no place in civilised society” but he stressed that this “thuggery” was, he believed, a separate issue to the ongoing protest.

“I thought he spoke brilliantly and he spoke with compassion,” said Fr Mawn who had pledged his support to the local community group opposing the asylum accommodation plan.

Fr Mawn said there had been “no fear mongering in Ballinamore” but he believed there had been “a certain anger and a certain annoyance” because of the lack of consultation by the Government and concerns about the numbers of asylum seekers being proposed.

But he said following the meeting with the Minister he though it was time to “review’ the protest.

Asked if he had any concerns about backing the protest given it might add to the trauma for asylum seekers expecting to be located there, Fr Mawn said, “I do feel it is time to review it because of that fear that it might be misinterpreted. It is time to look at it again”.