‘Armed struggle is pointless. It’s not going to achieve anything’ 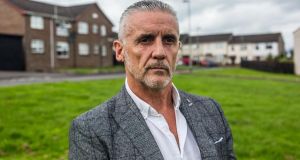 Frankie Quinn in Lisnuhull Park in Dungannon, the estate he grew up in. Photograph:James Forde

Frankie Quinn knew it was time for the IRA to call a ceasefire.

“We were saying the armed struggle’s failed, it can’t win,” Quinn explains. “The jails are filling up, people are dying left, right and centre and the British are getting the better hand on us.

“Obviously we knew in our hearts that we were deeply, deeply infiltrated at a very high level.

“The armed struggle had to stop. We’d dump weapons, call the ceasefire, and then go into talks,” he says.

Quinn was then a senior member of the IRA’s East Tyrone brigade. In 1988 he had been caught in possession of a 1,000lb bomb and sentenced to 16 years in prison. That same year, the Sinn Féin leader, Gerry Adams, and his counterpart in the SDLP, John Hume, had begun talking.

Despite atrocities such as Teebane in January 1992, when eight Protestant workers were killed by an IRA bomb in Co Tyrone, and the shooting by loyalists of five Catholics in Sean Graham’s bookmakers in Belfast the following month, talks were continuing through official and unofficial channels.

In Long Kesh – as republicans call the Maze prison, outside Belfast – Quinn says he and others from Tyrone and South Armagh were in a minority. “Belfast [IRA] and all these other people were saying we needed to fight on,” says Quinn. “All these other people – who are now standing up on stages – couldn’t be convinced. We had arguments with them.”

The ceasefire was announced on August 31st, 1994, and he recalls being told the news. “Some of the people at, let’s say, the top table got very emotional, but most of the rest of us knew it was coming and accepted it and said yeah, it’s good. That’s fine.”

The ceasefire lasted 18 months; a second, permanent ceasefire was announced in 1997. Quinn had been released in 1996. “I would have been involved, at a high level, let’s say, after that in a lot of the negotiations and manoeuvrings within the [Irish Republican] Army.”

His role was as a liaison between Sinn Féin and the rank and file of the IRA. “We would have been briefed and then we would have been coming back into our areas to brief locals,” he explains.

For Quinn, it was purely a matter of strategy and tactics.

“We weren’t able to achieve our goal any longer through military struggle and we needed to adopt another approach.”

His word held weight. He is still described as “well-got” in republican circles; as a former member of the IRA he has a long pedigree.

He joined the Fianna – the youth wing of the IRA – at 13. He and his family had moved back to his parents’ home town of Dungannon, Co Tyrone, from Belfast, after they were forced out of their house in a predominantly Protestant estate by the UDA.

He and his older brother Patsy had been threatened and attacked; eventually a UDA company smashed their door down. “They said, ‘You’re Fenians, you’ve 24 hours to get out or you’ll be shot’. So that was us heading up the road.”

In Dungannon, 15-year-old Patsy joined the IRA; he was killed a year later along with another IRA member, Daniel McAnallen, during an attack on the RUC station in Pomeroy, Co Tyrone, in August 1973, when the mortar bomb they were aiming at the police station misfired.

Frankie remembers the priest bringing the news late at night, and his mother’s screams. “It was the squeal that people describe that comes from the pit of the stomach, that you’ll never hear again and you’ll never forget, and we knew there was something wrong.”

Frankie followed his brother into the IRA. “I would have been running about, half on the run, game for anything, game to the extent that the local IRA men would have been saying, you need to take it easy. Every waking hour was ‘I need to get the enemy.’”

At 16, he was on the run in Dublin. He ended up living rough and getting into fights; he spent time in an industrial school and Mountjoy prison. “I was that committed that I didn’t expect nothing,” he says. “All that mattered was that I’d be getting back up to the Border soon.”

He spent six years “constantly on active service” around the Border, from Monaghan as far as Derry.

“You were a soldier, that was it,” he says. “That’s what came first. It was hard to find other people like that.

“What used to rag me was when other people would say, ‘I’m going to play football’, or ‘I’m going home to the wife’. I would have said, ‘What? This is more important than any of that’.”

He was motivated, he says, by a “severe sense of injustice” at the actions of the British army and the RUC, not least during raids on the family home. “To my mind we didn’t actually have much choice, to either lie down and take it or try and make a stand against a very oppressive state.”

While he acknowledges that others did not make that choice, he says, “They didn’t get the same harassment, in my experience.

“I did choose to fight against that oppression, and for that I will make no apology at all whatsoever, and would do the same again, with more vigour, possibly.”

In 1984, he was arrested while carrying a weapon at the Donegal border; he was sentenced to five years in Portlaoise prison. Six months after his release, he was arrested again, this time in Tyrone.

“We were caught on active service, it was a unit of four people armed with rifles and a landmine and an informer gave away our location and we were caught,” he says.

The bomb was intended to be used on a “military target”; if a civilian had been killed accidentally, Quinn says, “it would have been regrettable and unfair and unjust and the wrong thing to do, but unavoidable if civilians got caught up in a military attack.

“I would always have tried to make sure it was military-orientated, for political and propaganda reasons of course, but also because of human suffering. Once it’s been inflicted on yourself you don’t like inflicting it on anybody else.

“Having seen life taken, I presume it’s not that easy to take life. Personally, it never did happen to me, so I’m thankful for that, but you would regret it, of course.”

He might easily have been killed; of 14 comrades, he says, who were released from Portlaoise around the same time, only two are still alive. “The rest were killed, in Loughgall and places like that.”

He accepted the risks. “That’s what I was involved in. We were out with guns and if we met British soldiers or UDR or RUC they were dead, so if they killed me, so be it, that’s life.”

Quinn is now 59. He is no longer a member of the IRA; he and other comrades in the East Tyrone brigade left, he explains, over their opposition to decommissioning and the acceptance of the PSNI by Sinn Féin.

His goal remains the achievement of a '32-county socialist republic'. 'I’m still focused on achieving Irish unity and Irish freedom'

“We went fishing. There was a team of us went fishing for maybe six months, we didn’t know what we were doing.”

Instead, he became a founder member of the 1916 Societies, as well as the Tyrone National Graves Association, and is now the co-ordinator of Éalú, a support group for ex-prisoners in Dungannon.

Quinn is also a poet; he learned to read in prison, where he was mentored by, among others, Medbh McGuckian. His latest collection, Open Gates, was published last month by Hive Studio Books.

“For them to publish a book of poetry written by an ex-POW and a current republican activist has given me a lot of confidence and a sense of achievement,” he says. “Does that leave you that you’re accepting of society a bit more? It probably does.”

His goal remains the achievement of a “32-county socialist republic”. “I’m still focused on achieving Irish unity and Irish freedom,” he says. “The only thing I see as having changed is strategy and tactics.” He is opposed to those who continued to pursue their aims through violent means; while he is equally opposed to the term “dissident republican”, he explains that those who do espouse violence hate him because he challenges them.

The “clowns” who put up flags or are involved with bonfires “aren’t republicans . . . they’re hoods”, he says.

“My view on armed struggle at this stage is that it’s pointless, it’s not going to achieve anything.

“Irish unity wasn’t achieved by armed struggle. Is a bomb that takes a bit of concrete out of a gate post, is the shooting of an innocent young girl [Lyra McKee] going to achieve Irish unity? I don’t think so.”