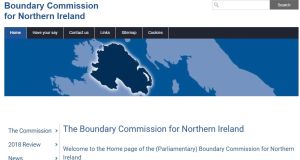 The map titled ‘2018 revised proposals’ was briefly accessible on a section of the Boundary Commission for Northern Ireland website earlier this week.

A plan to redraw electoral boundaries in Northern Ireland has been significantly altered, with Belfast now set to retain its four seats, according to an official map obtained by the Press Association.

The map titled “2018 revised proposals” was briefly accessible on a section of the Boundary Commission for Northern Ireland website earlier this week. While it has since been deleted, PA has secured a screenshot of the map.

The commission has confirmed the map temporarily went live during a test exercise.

An Alliance spokesman said: “It is notable what is suggested here is radically different from the provisional recommendations in 2016. Due to the unofficial nature of the release of these proposals, we will take time to study them in due course.”

Northern Ireland is losing one constituency as part of wider government plans to reduce the number of seats in the UK from 650 to 600. How the reduction from 18 to 17 seats is achieved has become the source of political controversy.

The commission’s first proposals, published in 2016, were heavily criticised by the Government’s kingmakers, the Democratic Unionists, who claimed it could undermine the political stability of the region. Analysts suggested the first version would see the DUP lose a seat to Sinn Féin in Belfast.

That map saw Belfast drop from four constituencies to three with the redrawing of a number of boundaries elsewhere in the region. It envisaged the creation of a series of new constituencies — North Tyrone; Glenshane; Dalriada; West Antrim; Upper Bann and Blackwater; and West Down — by merging parts of existing constituencies.

The revised map that was accessible on the Commission website on Monday is significantly different. Belfast retains its four seats, with radical changes to the constituency landscape beyond the city. All the new named constituencies in the first draft are gone.

The commission, which is an independent body funded by the Northern Ireland Office, has conducted a number of public consultation exercises on its first proposals and is anticipated to officially publish revised proposals at the end of the month.

The map that briefly went public on Monday envisages the creation of a Causeway constituency on the north coast, merging part of East Londonderry with part of North Antrim and a small section of East Antrim.

The remainder of North Antrim is renamed Mid Antrim and takes in parts of East Antrim and South Antrim.

South Antrim, in turn, takes part of a defunct Lagan Valley. Another portion of Lagan Valley merges with a section of Strangford, and a small part of South Down, to become Mid Down. South Belfast is also expanded to take in parts of Lagan Valley and Strangford. Like Lagan Valley, the Strangford name is gone. The remaining chunk of the constituency is absorbed into a significantly larger North Down.

The remaining parts of East Londonderry are absorbed by enlarged West Tyrone and Mid Ulster constituencies.

Unlike the expansion proposed under the first draft, Fermanagh and South Tyrone remains largely unchanged.

A spokesman for the Boundary Commission for Northern Ireland told PA: “During the preparation for our Revised Proposal consultation, which begins on January 30th, 2018, the functionality of the website was being tested including the interactive map facility.

“The interactive map facility was accessed during this testing phase. The Commission will be proceeding with the Revised Consultation on 30 January as planned.”

The map has come to light amid on-going speculation that the wider UK 2018 boundary review could be scrapped. Labour has opposed the plan, with the party standing to lose seats under new boundaries, and some Tory backbenchers are also unhappy with the proposal to cut the number of MPs to 600.

Last week the Commons Public Administration and Constitutional Affairs Select Committee heard evidence about the implications of scrapping the review.

The final proposals are due to go to the Government in September. Once they are laid before Parliament, MPs can approve or reject them.