Over 30 Ministers spreading the message on St Patrick’s Day 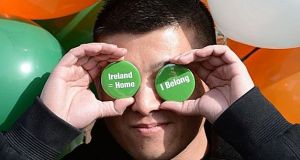 Ministers will be asked, among other things, to reinforce our message on Brexit, Northern Ireland and the economy. Photograph: Alan Betson/The Irish Times

More than 30 Ministers, the Attorney General and chairperson of the Dáil and Seanad will travel abroad for St Patrick’s Day.

Tánaiste Simon Coveney has announced the details of the various trips Ministers will take on St Patrick’s Day. Each will be asked to reinforce messages on Brexit, Northern Ireland, our campaign to become a member of the UN Security Council in 2021-22 and the economy.

Mr Coveney, who will visit China and Hong Kong, said Ministers will seek to build strategic alliances internationally in the context of a post-Brexit European Union.

The Tánaiste added: “St Patrick’s Day provides Ireland with an unparalleled opportunity to promote our political and economic interests abroad, as well as access to key political and business contacts in leading markets around world.”

Taoiseach Leo Varadkar will travel to the United States for the annual St Patrick’s Day visit to the White House.

Attorney General Séamus Wolfe will also travel to the US, as will Minister for Jobs Heather Humphreys, Ministers of State Michael D’Arcy, David Staunton, Brendan Griffin and Ciarán Cannon.

Minister for Transport Shane Ross will stay in Ireland for the second year in a row.

Ceann Comhairle Seán O’Fearghaíl and Cathaoirleach of the Seanad Dennis O’Donovan are also included in the St Patrick’s’s Day Programme.

Mr O’Fearghaíl will travel to Croatia, while Mr O’Donovan will visit Slovenia and Bosnia Herzegovina.

Ministerial travels: Where in the World

What should Leo say to Donald at the White House this year?

The Netherlands and Belgium