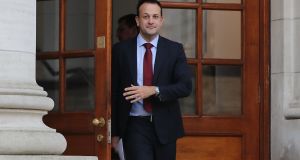 Taoiseach Leo Varadkar: previously expressed caution about the proposal to legalise abortions up to 12 weeks, suggesting last week that it might be ‘a step too far’ for many people. Photograph: Niall Carson/PA Wire

Taoiseach Leo Varadkar has signalled for the first time that the Government will accept the recommendations of the Oireachtas committee on the Eighth Amendment.

Opening a special meeting of the Fine Gael parliamentary party on Monday at Leinster House, Mr Varadkar said the proposals to repeal the Eighth Amendment and allow for abortions up to 12 weeks were a “strong option” for the Government.

However, by the conclusion of the five-hour meeting, the Taoiseach said he believed there was a majority belief that the Government should not stray too far from the committee’s recommendations.

There would have to be very good reason to move away from the recommendations and any change would require support from the other members of the minority Government, Mr Varadkar told the meeting. He said he expected the referendum campaign to be led by civil society groups.

Mr Varadkar has previously expressed caution about the proposal to legalise abortions up to 12 weeks, suggesting last week that it might be “a step too far” for many people.

Fine Gael and Government sources interpret Mr Varadkar’s public caution as an attempt to bring wavering members of the party along with the Government.

Most sources believe the Taoiseach, who has not publicly stated how he will vote in the referendum, will personally back the repeal of the Eighth Amendment and the committee’s recommendations.

The meeting heard from up to 40 members of the Fine Gael parliamentary party. Those who spoke against the committee’s recommendations included Louth TD Peter Fitzpatrick, Waterford TD John Deasy, Minister of State Ciarán Cannon, Minister of State Seán Kyne and Senator Paul Coghlan.

While indicating there should be some change, Tánaiste Simon Coveney expressed concern about the proposals by the committee and outlined his desire to protect the life of the unborn and the mother.

Minister for Health Simon Harris said abortion was a reality in Ireland that could not be ignored by the Government. Before the meeting, Mr Harris said the Government should accept the recommendations of the Oireachtas committee.

The Dáil will begin a two-day debate on the committee’s report on Wednesday, and a formal Cabinet decision to hold a referendum is expected either later this month or at the start of February.

Some 75 TDs have now declared their support for repeal of the Eighth Amendment, with 30 opposed and 53 undeclared. Eighteen Fine Gael TDs are now on the record as backing repeal, with three against and 29 undeclared. Many of those are expected to make their positions clear in the coming days.

More Fianna Fáil TDs came out against repeal over the weekend, with 20 of the party’s TDs now saying they are opposed, with six in favour and 18 undeclared.

A large majority of the remaining TDs are in favour of repeal.

The Irish Times understands that Mr Varadkar met Fianna Fáil leader Micheál Martin last Thursday to discuss the forthcoming Dáil term, and the two men discussed the prospects and process for a referendum to happen before the summer.

What did the Oireachtas Committee on the Eighth Amendment conclude?

The Oireachtas Committee on the Eighth Amendment concluded in December 2017 that Article 40.3.3 should be removed from the Constitution and politicians should be allowed to legislate for abortion.

After three months of evidence and a series of votes, the committee stated the current regime for the termination of pregnancy is unfit for purpose and that constitutional reform is necessary.

Legislation should be prepared to permit terminations up to 12 weeks of pregnancy, without restriction, by way of a GP service, the committee said. It concluded that legislating to allow for abortions in the cases of rape and incest would have presented significant challenges.

It was the committee’s opinion that a verification process to prove someone was the victim of sexual assault, was likely to be complex or even unworkable and could have caused further trauma to a victim.

These difficulties and the availability of abortion pills led the members to agree abortions should be allowed up to 12 weeks of gestation.

The committee’s final reportconcludes abortions should be allowed when a mother’s life or health is at risk. Such a risk cannot be determined in legislation as it is dependant on individual circumstances and should be considered in a clinical setting