Minister for Health: 3,265 women from every county had travelled abroad for abortions last year

Opening the debate on the report of the Oireachtas committee on the Eighth Amendment, Minister for Health Simon Harris said 3,265 women had travelled abroad for abortions in 2016 and he listed the number of those who travelled by county. Video: Oireachtas TV 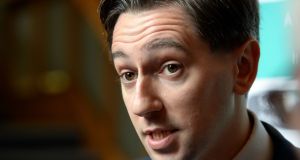 Simon Harris said that if it was the “sad reality that we have been exporting this issue, are we now accepting that women must import their own solutions”. File photograph: Cyril Byrne

Abortion is a reality for women living in Ireland and is an issue that is not going to go away, Minister for Health Simon Harris has said.

“Ultimately, there is always a deeply personal, private story behind each individual case which I believe is a matter for a woman and her doctor. I believe the Irish people trust women and they trust doctors to make these difficult decisions.”

He said that if it was the “sad reality that we have been exporting this issue, are we now accepting that women must import their own solutions”.

Opening the debate on the report of the Oireachtas committee on the Eighth Amendment on Wednesday evening he said that in facing the issue it holds up a mirror “in which we sometimes don’t like what we see.

“Whether it is the damp cold of the Magdalene laundries creeping into our bones, or the sundered silence of mother and baby homes being broken, or the glimpses of what was an all too acceptable culture exposed by the Kerry Babies case - all of these things are connected. Connected by the way we as a country have treated women, particularly pregnant women,” he said.

“I think of another cold January like this one in 1984 when the 15-year-old Ann Lovett gave birth alone to her son beneath a statue of Our Lady. The death of Ann and her baby son in these stark and lonely circumstances is a memory that chills us still and one we should not forget,” he added.

Mr Harris said 3,265 women from every county in the State had travelled abroad for abortions and he listed the number of women who travelled in 2016.

Thirty six women travelled from Co Carlow to the UK for an abortion, 38 from Mayo, 69 women from Tipperary, 85 from Wicklow, 241 from Cork and 1,175 women from Dublin.

Fianna Fáil health spokesman Billy Kelleher said the issue was primarily about women’s rights and about giving them equal opportunity. “We cannot have a situation where when a woman becomes pregnant she becomes a second class citizen and we have to accept that situation is no longer acceptable.”

He pointed to the 170,000 women who had left the State for an abortion. “We have been exporting our problem for a very long time and it’s our duty I believe to address this issue.

“If the Eighth Amendment was not repealed, every night five women would continue to take abortion pills in their own homes and 10 would travel every day for an abortion.”

Echoing the view of the Minister that the main decision had to be made by women and their doctors, Mr Kelleher said “I firmly believe we must trust our women in this respect”.

He knew women who had made a difficult choice to travel for an abortion and said it was wrong to say women were using abortion as “a form of contraception.”

“We have to change what is currently in our constitution and I believe that is the first step to addressing this issue,” he said.

“We have to as a generation of politicians, deal with this issue and we have to give the Irish people an opportunity to express their view given the last time they had the opportunity was in 1983 and Ireland has changed fundamentally since then.”

He said people who oppose abortion are entitled to do so and are equally entitled not to have a termination. “Everyone has the right to choose.”

But he said “it’s not for anyone to push their views on anyone else”.

He said repealing the Eighth Amendment is the right thing to do. “It will correct a historic wrong.”

Sinn Féin accepted the availability of abortion where a women’s life, health or mental health is at serious risk or in cases of rape or sexual abuse.

Mr Adams said at their ardfheis they dealt with the issue of fatal foetal abnormality because “I for one never knew there was such a condition” and the party backs abortion in such cases.

She said the debate was a matter of public health, “women’s health and our right to decide on matters for ourselves”.

The debate was taking place as revelations relating to the 1984 Kerry Babies case were in the news again. She said Joanne Hayes had been badly wronged by gardaí and by the subsequent tribunal.

Ms McDonald described the 1983 abortion referendum as the “constitutional compounding of the oppression of women”.

Labour leader Brendan Howlin said the referendum on same-sex marriage was for many a “journey of self-discovery and tolerance - perhaps we can hope for something similar on this issue too”.

He called on the Government to ensure the referendum was held in May. “State Examinations begin on the 6th June. By June college students will already have left their colleges, many to travel abroad.”

He said “it cannot be right that those voters who have never had the opportunity to express an opinion on this matter are excluded from the vote.

“I sincerely ask that the government fix a day in late May and work back from it a timeframe to address all the matters that need to be addressed.”

Independent TD Michael Healy-Rae said “I just don’t agree with abortion and I just don’t think it’s right and nothing will ever, ever change me from that view.”

He said nobody wanted an Ireland of the Kerry babies or an Ireland where young women were locked away in mental institutions because they had become pregnant. “If a person becomes pregnant there are services, there is support there is back up. Nobody is judging anybody now like it was in the past.”

Mr Healy-Rae also expressed concern about people with Down Syndrome and believed that “if we go down this road are we going to have a situation that people will play God with these people’s lives that if people are imperfect they are not going to be born.

“If you’re not perfect and you’re inside the womb you have the same right to come into this world as people who are perfect.”

People Before Profit TD Bríd Smith said those who think that if they retain the Eighth Amendment they are protecting something precious “you are not. All you’re protecting is the dark, dark, history of this country”.

She said they did not have to go back to the Kerry Babies to know that “we are living in the dark ages”.

Ms Smith listed a series of controversies around pregnancy and abortion including last year when a young pregnant woman deemed at risk of suicide was sectioned under the Mental Health Act when she sought an abortion.

In 2014 the State kept a clinically dead pregnant women alive for eight weeks against the wishes of her family because there was a foetal heartbeat.

The Dublin South-Central TD said that “for 21 solid years no party had the guts to move on this issue until Clare Daly introduced a Bill in 2012”.

Independent TD Catherine Connolly said in March 1983 a woman called Sheila Hodgers died after her cancer treatment was stopped when she became pregnant. She said this was before the abortion referendum when the State knew what it would be doing.

Ms Connolly said the most ironic thing was that the most liberal countries had the lowest abortion rates.

Independent TD Thomas Pringle said he was disappointed that the provision of abortion did not go beyond 12 weeks.

“Once you start introducing restrictions inevitably some will fall through the cracks,” he said.

He told the Dáil that “right now only men in Ireland enjoy bodily autonomy”.

Earlier Solidarity TD Ruth Coppinger expressed concern in the Dáil that some deputies have not read the Oireachtas committee’s report on the Eighth Amendment, saying “you’d think they were asked to read War and Peace”.

Speaking ahead of the Dáil debate on the report, Ms Coppinger said she feared a referendum on repealing the Eighth Amendment, which gives an equal right to life to the mother and the unborn, could be delayed beyond the target date of May 25th.

Ms Coppinger told the House she was concerned that the committee’s report, which was published four weeks ago and runs to 36 pages, had not been read by many in the Dáil.

“The number of deputies who have not had time to read it you’d think they were asked to read War and Peace rather than a short report,” she said. “When it comes to the rights of women TDs wrestle with their consciences in a way they never do when it comes to hospital beds or bailing out banks.”

Tánaiste Simon Coveney told Ms Coppinger “I don’t think we should be drawing conclusions before the debate even starts.”

He said the Department of Health expected a series of memoranda to be submitted to Government between late January and early March on the referendum.

Once these were accepted a Constitutional Amendment Bill to allow a referendum go ahead would have to be initiated and passed between March and mid-April, he said. The referendum would have to take place between 30 and 90 days after the Bill is passed.

A referendum commission, which explains the referendum and the process involved, would also have to be established and Mr Coveney indicated that it would require four months to do its work properly.

“We have committed to putting together at least the heads of a Bill to try to set a context around the answering the question that people will rightly ask... about what the reality will be” after the referendum, he said.

Ms Coppinger said the legislation on the future abortion regime should be published but that she had “no confidence that this Dáil could be trusted to enact that legislation unless it gets an endorsement from the public in a referendum”.

She said her party had a simple Repeal Bill and if the Government did not want to move it Solidarity might introduce it next week.

Mr Coveney said he was not sure that it would be “conducive to us to move together” and he said it was the Taoiseach who was taking the initiative and leading on the issue of a referendum.

A pro-choice demonstration is to be held outside the Dáil on Wednesday evening to coincide with the debate on abortion and Ms Coppinger said the young women involved were “the people who will face crisis pregnancies in the future”.

1 Covid-19: ‘Green list’ may shorten as Cabinet looks to tighten travel restrictions
2 David Trimble: After the big dinner in Oslo, somebody said why don’t we party together?
3 Coronavirus experience shows how Greece’s weakness is its sunshine
4 Maureen Dowd: The US president and the damage done
5 Five Covid-19 clusters found among Irish fruit and vegetable growers
Real news has value SUBSCRIBE