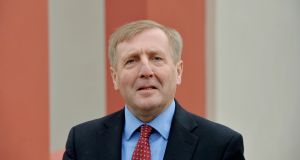 Minister for Agriculture Michael Creed: “The UK is a critically important trading partner for the Irish agri-food sector, with almost 40 per cent of our exports going to the UK in 2016.” Photograph: Alan Betson

The Irish Government’s aim is to emerge from the Brexit process having retained the closest possible relationship between the United Kingdom and the EU, Minister for Agriculture Michael Creed has said.

Speaking on the first night of the inaugural Killarney Economic Conference on Friday night, held in partnership with The Irish Times, Mr Creed said this ambition was particularly critical in the agri-food sector where a “highly-integrated” relationship between Ireland and Britain had been built up over decades.

The sector accounts for almost 9 per cent of employment in Ireland, with a total value of over €12 billion. He said there was a generally positive outlook for 2018 despite the potential threat from Brexit.

“The UK is a critically important trading partner for the Irish agri-food sector, with almost 40 per cent of our exports going to the UK in 2016.”

The Bord Bia figures for 2017 indicate that, while there has been a further increase of 7 per cent in the value of exports to the UK, the overall proportion of exports going to the UK is slightly lower than in 2016.

“This demonstrates the success of our efforts to expand into new, non-UK markets while at the same time continuing to build on our long-standing and valued UK markets.”

He said the most immediate impact of Brexit on the sector over the past 18 months has been caused by the drop in the value of sterling, resulting in serious financial losses for many sectors, particularly the horticulture and forest product sectors.

He firmly rejected Ireland following Britain out of the EU because of the high dependency of the agri-food sector on the British market.

“We believe it is vitally important that Ireland remains a full participant in the European Union and, by extension, the global economy.

“Membership of the EU has been key to our progress, in that it has provided the peaceful and secure external environment most conducive to economic growth,” he said.

Mr Creed said that when the negotiations on future relationships begin, his department will argue for continued free access to the UK market, without tariffs and with minimal additional customs and administrative procedures.

He also said the Government would seek a minimisation of the risk that would arise from new UK trade agreements with third countries.

The third priority, he said, was the maintenance of current access to the UK fishing zone in the Irish Sea, Celtic Sea and north of Donegal.

“I can assure you that my focus will continue to remain on the need for a robust, status-quo transition period,” he said.

Mr Creed also pointed to another impact of Brexit that was pertinent to places such as Killarney: the drop in visitor numbers.

He said the number of British visitors to Ireland had declined by 6 per cent in 2017.

“The Government’s ongoing commitment to tourism was reflected in the recent budget when the 9 per cent VAT rate on tourism services and the 0 per cent air travel tax were retained,” he added.