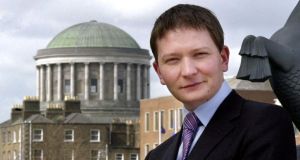 Belfast solicitor Michael Finucane was involved in the circulation of the letter. Photograph: Cyril Byrne

The Taoiseach has been urged to defend the legal, human and language rights of Irish citizens in the North in a letter signed by 100 prominent people in the arts, law, sport, academia and civil society.

The letter, and delivered to Leo Varadkar’s office last Friday, mirrors a similar letter sent to him by 100 representatives of civic nationalism in the North before Christmas.

In the letter, Mr Varadkar is told that the signatories are “shocked at the level of permanent inequality in respect of access to rights that people in the North are expected to endure”. “In summary,” it says, “these are: marriage equality, language equality and access to justice before a court of law.”

It says “families of those affected by the conflict in the North cannot gain access to justice in court”, citing the lack of funding and court resources.

The letter says Irish people are proud of their role in legislating for marriage equality and are “rightly championed around the world as bold and determined advocates for tolerance and equality”.

“How can we, as citizens, in Donegal or Louth, sit idly by when rights enjoyed by us are denied to our neighbour, families and friends in Derry or Armagh?” the letter asks.

It calls on Mr Varadkar to ensure that “equality, human rights and respect afforded to Irish citizens in the South are enshrined as inalienable rights in the North.”

Michael Finucane, the Belfast solicitor, was involved in the circulation of the letter. Last night he said: “The signatories to the letter come from a diverse number of backgrounds but each of us has the same purpose: to emphasise the seriousness of our concerns at the lack of respect for basic human rights in the North of Ireland.

“Rather than sit idly by, we have come together to urge the Irish Government to do everything in its power to establish meaningful protections for the same basic rights to equality and truth that are enjoyed throughout Ireland by every other citizen.”

Although the letter is not linked with any party, The Irish Times has established that the latter was circulated by the Sinn Féin political co-ordinator for the 26 counties, Ken O’Connell, who confirmed he had sent the letter on to party colleagues last week.