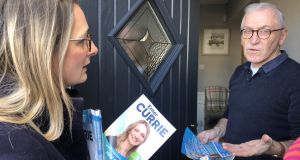 Taoisigh and ministers are expected to bring in a running mate, but those close to Leo Varadkar have previously claimed his Dublin West constituency is too left-wing for Fine Gael to mount a serious challenge for two seats.

That was when Varadkar was merely a high-profile Opposition TD, like in 2011, or a government minister, like he was in 2016. When he was first elected to the Dáil in 2007, Varadkar stood on his own in what was then a three-seat constituency.

But the old left-wing excuse would stretch credulity if it were offered now, when Varadkar is Taoiseach.

Dublin West is now a four-seater and at Election 2020 Fine Gael wants to take two out of four, although other local sources doubt it can be done.

When Fine Gael support nationally was consistently about 30 per cent, two seats was a realistic target.

She is accompanied on a mid-morning canvass of the Lambourn Park estate in Clonsilla in Dublin 15 by party veteran Gerry Leahy, who says the party would need 30 per cent in the constituency – the combined Fine Gael vote in Dublin West in 2016 was 21 per cent – to be in with a chance of taking two seats.

“In fairness to the Taoiseach, she is not a token second candidate,” he says. “We are giving her a real shot.”

Varadkar does not have a reputation of being a generous running mate. In 2016 he polled 19.7 per cent of first preferences, with his then running mate Catherine Noone recording 2.6 per cent. Local Fine Gael sources said he has given Currie 60 per cent of Dublin West for this election.

“In this area we are saying number one for me and number two for Leo,” Currie says on a number of doors in Clonsilla, near her Westmanstown home.

She came second in the six-seat Castleknock local electoral area of Fingal County Council in last year’s local elections. She and Ted Leddy, also from Fine Gael, polled a combined 27.3 per cent, just ahead of Roderic O’Gorman of the Greens on 27.2 per cent.

Some who answer doors in Lambourn Park say they know Currie from her local work on the council, although others are less enthusiastic. One man turns Currie’s canvassers away by telling them his house is one which supports the Greens or Ruth Coppinger of the Socialist Party.

Currie believes her local work should mitigate the negative effects of any national swing against Fine Gael.

“The longer I have had on the ground, the more of a personal vote I have and so I would hope I am more insulated from something like that.” Such work, she says, has helped her develop as a candidate in her own right, rather than just being the Taoiseach’s running mate or her father’s daughter.

Her campaign theme is what she calls the “struggle to juggle”, which she says comes from her experience as a mother of two and a daughter of elderly parents who is also working through her career.

On the doors, Mary O’Riordan says she was a Fianna Fáiler but will now support Varadkar and Currie.

“He has done no worse than anyone else,” she says of the Taoiseach. “I was always Fianna Fáil until the banks and everything else, the crash.”

Vincent Hegarty also says he will vote for Currie, but keeps her at the door to discuss local transport links.

Trying to get in will also be the challenge for both Varadkar and Currie, with one trying to get back into Government Buildings and the other aiming to get into the Dáil for the first time.

Such are the fine margins which will decide this election, the Taoiseach may need to repeat the pattern of his predecessors and bring a running mate if he is to get a second term.