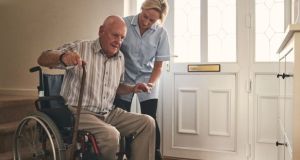 Talks will take place on Thursday aimed at averting a potential strike by hundreds of home-help staff just before polling day in the general election.

The dispute centres on restoration of pay in organisations providing health and social care services that receive State grant aid (known technically as section 39 bodies) which was cut following the economic crash.

The trade union Siptu had balloted members working in a number of organisations providing home-help services which it maintained did not honour the terms of an agreement on pay restoration reached last year.

About 50 Section 39 organisations were covered by this agreement.

However separately there are about 250 other Section 39 bodies which were not encompassed by this deal.

Industrial action in these organisations is also a possibility in the weeks ahead.

Earlier this week trade union Fórsa said its members in a small number of section 39 agencies were to be balloted for industrial action as part of the campaign for pay restoration.

The HSE in its service plan for this year said it would continue with the implementation of pay restoration in respect of the organisations in the initial group of 50 agencies covered by the deal last year.

However, it said it would engage with the Workplace Relations Commission “in relation to the feasibility of extension beyond that 50”.