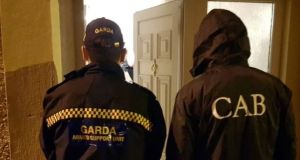 The CAB officers were backed up by local gardaí from West Cork and Kerry in the two raids which happened at around 7.30am this morning. File photograph

Members of the Criminal Assets Bureau have seized property in raids on houses in Cork and Kerry as part of an investigation into the activities of an international crime gang.

Some 25 officers from CAB raided a house in Aherla in Mid-Cork and another house at Caragh Lake in South Kerry in an operation targeting a 50-year-old man suspected of involvement in money laundering for the crime gang.

CAB officers seized two cars, a 182-registered Audi TT and a 161-registered Mercedes Benz, as well as €1,400 in cash, three high-value watches and laptops, phones and documentation in the raids.

It’s understood that CAB was also examining the man’s recent involvement in buying large amounts of crypto-currency. Investigators suspect it may be being used as a means of laundering the proceeds of criminal activity.

CAB officers also raided a solicitor’s office in Cork city and seized a quantity of documentation as part of their investigation into the suspect who has previously served a jail sentence for criminal activity.

The CAB officers were backed up by local gardaí from West Cork and Kerry in the two raids which began at around 7.30am this morning and lasted for several hours. No arrests were made but CAB say the investigation is ongoing.

During a visit to Cork in September 2018 Det Chief Supt Patrick Clavin of CAB revealed the bureau was carrying out investigations into 30 people in Cork city and county suspected of benefitting from criminal activity.

He said CAB was looking at 16 targets in the Cork City Garda Division, where 11 Garda profilers were working and where CAB was carrying out seven full investigations and nine preliminary investigations.

In Cork North Garda Division, seven garda profilers were involved in identifying possible beneficiaries of crime. And CAB was currently carrying out three full investigations and one preliminary investigation, he said.

“Most criminality is drug related and the next after that would be burglaries, organised prostitution, smuggling such as cigarette smuggling, fuel smuggling and all those forms of criminality would be among the 30 targets that we have here in Cork city and county,” he said.