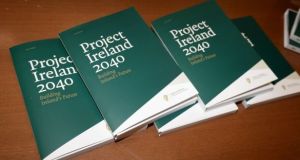 The Government has allocated €900m for the M20 as part of Project 2040. Photograph: Alan Betson

The Government does not know what the full cost will be for the M20 road from Cork to Limerick despite the fact €35 million has been spent on the project to date.

Briefing notes about the long-awaited new road which were given to Taoiseach Leo Varadkar’s advisers last year said that there is “no cost estimate at this point in time” for the M20.

The notes obtained by The Irish Times under the Freedom of Information Act said the most recent cost estimates of €850 million to €900 million are based on figures which were given in 2010 and 2011.

Sources have indicated that it could, in fact, cost up to €1.2 billion and that the actual price may not emerge for some years to come.

The documents reveal that €35 million has already been spent which includes €20 million from 2008 to 2012 when it was then mothballed because of the recession. Technical advisors are now being paid €15 million as part of a contract to progress the development of the road.

The documents address the issue of whether the previous attempt at building the road was “wrong” or not. They say it was “correct at the time” and that the “previous M20 scheme was withdrawn from planning in 2012 due to the economic crisis and a decision was never made on the planning application.”

In relation to the potential route, it says that “nothing [is] ruled in or out at this stage.”

The Green Party has said the road, which is the Government’s flagship infrastructure project outside of Dublin, does not make sense.

The party has said that if it enters Government it will be looking for funding to be directed at cycling, walking and public transport instead.

Further documents released under Freedom of Information legislation show how a number of voters threatened to desert Fine Gael if the road was not built.