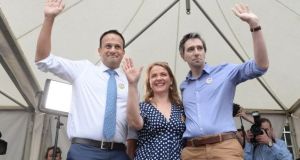 Senator Catherine Noone with Taoiseach Leo Varadkar and Minister for Health Simon Harris at the central count centre for the referendum on repealing the Eighth Amendment. Photograph: Dara Mac Dónaill/The Irish Times

Fine Gael has done a U-turn on its decision to pause the constituency voting divide between Richard Bruton and his running mate Senator Catherine Noone, who was involved in controversy earlier this week for calling Taoiseach Leo Varadkar “autistic”.

Mr Bruton, the Minister for Communications, and Ms Noone are standing for the party in five-seat Dublin Bay North. They had split the constituency between them, with some requests sent out to Fine Gael voters in different areas to give a specified candidate a first preference in order to maximise the party vote.

Local sources in Dublin Bay North and national sources at the top of the party told The Irish Times the constituency divide had been “paused”.

However, the party later did a U-turn on this decision with Mr Bruton even claiming suggestions of a pause in the divide were a “fabrication”. Sources afterwards said the publication of an Irish Times report had caused internal controversy and prompted the U-turn.

The earlier decision came after a series of meetings between Ms Noone and senior party figures, such as Minister for Finance Paschal Donohoe who is Fine Gael’s director of elections, and Tom Curran, the general secretary.

Ms Noone is understood to have asked she be given the opportunity to explain herself in a broadcast media interview.

It is understood Mr Donohoe and Mr Curran decided against putting Ms Noone out on the national airwaves.

Last night Fine Gael did not respond to requests for comment on the voting divide. Ms Noone did not return calls