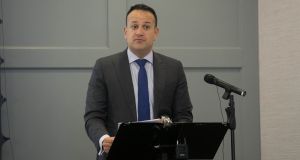 The Taoiseach said that in areas where housing developments were planned Sinn Féin was trying to prevent building going ahead. Photograph: Gareth Chaney/Collins

Taoiseach Leo Varadkar has rejected calls for a rent freeze and said the solution to the housing crisis is rent control and increase the supply of social and other housing.

Mr Varadkar said however the Government had considered a freeze in rent but apart from constitutional difficulties there could be unintended consequences of a rent freeze.

A rent freeze might work for people who are renting already but might cut supply of rental properties and people who have to rent for the first time could run into difficulty and that could be counterproductive, he said.

Mr Martin demanded a fundamental shift in housing policy in the wake of statistics released on Tuesday which showed that there could be another eight to 10 years of “high rent misery”.

The statistics in the property website Daft.ie report showed the average monthly rent in the third quarter of this year hit €1,403, the 14th consecutive quarter of record rents.

Mr Martin said homes in part of Dublin were up by 125 per cent over the last nine years with similar increases in Cork, Limerick and Galway.

He said thousand so people were trapped in high rent misery and there was anger on the doorsteps where families of five or seven adults were in one home because young people could not afford to rent.

Mr Varadkar acknowledged that rents had become unaffordable for many people but he said the report by economist Prof Ronan Lyons stated that Ireland’s longest run of high rents may be coming to an end.

The report said that the rate of rental inflation dropped to its lowest level in six years in the third quarter of this year.

Mr Varadkar said that rent controls showed that maximum increase was somewhere between 0 per cent and 4 per cent.

But he said the statistics only captured new tenancies not the existing ones, where hundreds of thousands of people had been protected by rent controls.

He said other statistics showed that a very big increase – 28 per cent – in commencement notices for new builds and over 30 per cent new planning permissions – 31,000.

He said there was an increased supply in social housing. There would be an extra 10,000 social houses this year “more than any this century” and 12,000 next year.

This Government had introduced the help to buy scheme which ensured that 15,000 young people “ have been able to raise a deposit and supply is now coming on stream” and “fundamentally that is the solution”, the Taoiseach stressed.

But Mr O Laoghaire told the Taoiseach that “what you’re telling people is you’re still drowning but you’re drowning slower”.

He said the rental crisis was “crushing” people.

But the Taoiseach said that in areas where housing developments were planned Sinn Féin was trying to prevent building going ahead.

He said that Sinn Féin “tried to vote down a proposal for 800 new homes close to Dublin city centre” a mix of private, social housing and rental properties.