Costs review at children’s hospital after fresh claims by contractors

Robust defence to be mounted against claims, says chief of hospital development board 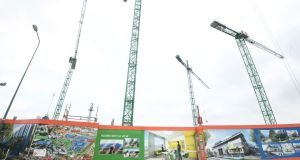 Taoiseach Leo Varadkar has said there had been no increase on the 2019 budget allocation for the building. File photograph: The Irish Times

The board of the national children’s hospital is reviewing “significant potential costs” arising from new financial claims made by contractors, it has emerged.

In a letter to the Public Accounts Committee the chief officer of the National Paediatric Hospital Development Board, David Gunning, said the board would defend itself robustly against the new claims which sources say could push the cost of the project higher.

“The NPHDB is also reviewing significant potential costs as additional claims are presented from the contractor. The NPHDB is diligent in its examination of these claims and is providing a robust defence in relation to these in line with the PWC recommendations that the board has implemented,” the letter stated.

“In addition, and in accordance with the construction contract, there is a dispute management process in place to deal with these claims through the appointment of a standing conciliator.”

It comes after Taoiseach Leo Varadkar said there had been no increase on the 2019 budget allocation for the building.

Minister for Health Simon Harris also said that claims of cost increases at the hospital are commercially sensitive.

Sinn Féin’s Health spokeswoman Louise O’Reilly said the Government needs to crystallise the level of the claims that are being made.

“These claims need to be validated as quickly as possible and the Government need to get a handle on the spending on the hospital because it cannot be allowed to be a cash cow for the construction industry,” she said.

Meanwhile, it is still unclear how much the new national children’s hospital will cost to run when it is finally opened.

A memo to Government on the project in April 2017 said the operating cost for the new hospital and associated urgent care centres would be € 324.9 million in 2022 – the date the facility was scheduled to be opened.

The Cabinet was told last December by Mr Harris that this figure had increased to €366 million for 2023 – mainly due to additional staffing levels and pay costs.

The Department of Health told the Oireachtas committee on budgetary oversight in August 2019 that Children’s Health Ireland – the organisation that governs acute paediatric services in Dublin – was carrying out a review of these figures. The department estimated this exercise would be completed by the end of October.

Paediatric hospitals group Children’s Health Ireland said this week that work on this issue was in progress and it was “not expected to be concluded until year end and therefore we can not comment any further until after it is completed”.