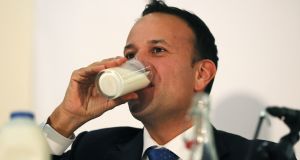 Ireland is the third best country in the world to live when it comes to quality of life, Taoiseach Leo Varadkar has told the Dáil. Photograph: Brian Lawless/PA Wire.

Ireland is the third best country in the world to live when it comes to quality of life, Taoiseach Leo Varadkar has told the Dáil.

To rowdy interventions from the Opposition benches, Mr Varadkar said he wanted to acknowledge the United Nations report in which Ireland has moved up from 17th place in 2012. “It’s based on the economy and jobs, on life expectancy and on education,” he said.

Mr Varadkar went off topic to highlight the issue as he came under repeated opposition criticism over levels of fuel poverty, homelessness and about the decision not to expand the ban on smoky coal nationwide despite previous pledges.

The Human Development Index rankings are calculated by looking at health, education and income in countries. Norway topped the list, followed by Switzerland and Ireland, with the UK and US taking 15th and 16th places respectively.

Life expectancy in Ireland, at 82 years, was 16th out of 189 countries, and in Education Ireland was ranked seventh. Qatar led the income category with a gross average of €98,630. Ireland ranked 12th on the list at €55,265. The lowest income was recorded in Burundi, at €596.

The Taoiseach said of the report was not his opinion but rather that of a UN agency. To repeated heckling he said he looked forward to “the Prime Time special dedicated to exactly how we managed” to rise up the rankings.

Mr Varadkar raised the issue of after Fianna Fáil leader Micheál Martin criticised the Government over the failure to expand the smoky coal ban despite a promise in September 2015 that it would be in place within a year.

It is now to go to consultation which Mr Martin claimed was “more ducking and diving and dodging of the core issue, failure of backbone and failure to stand up to the vested interests”.

He said the HSE estimated the cost of poor air quality at about €2 billion a year to the exchequer and that it was extraordinary that the Government could not implement a ban when former minister Mary Harney introduced one in 1990.

Mr Martin said former minister for the environment Denis Naughten had said the ban would be in place if he had not resigned last year.

Mr Varadkar said things had changed since 1990. He said turf, briquettes and solid fuel were just as bad for air quality as smoky coal and that had to be kept in mind as extending the ban nationwide “may cause the entire ban to be struck down and that would be a disaster”.

Sinn Féin TD Eoin Ó Broin earlier highlighted a report from the Society of St Vincent de Paul, entitled Growing up in the Cold, which states that 140,000 children are living in homes with leaks, damp and rot and that one in six households spends more than 10 per cent of its income on heating and electricity.