‘It is easy to understand how people were able to do these things’, says Martin Kenny 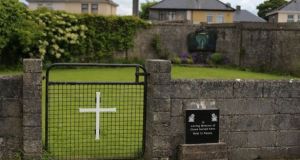 The site of the mass grave for children who died in Tuam. What happened “is just so horrific, so terrible and such a shame on Ireland”, said Sinn Féin’s Martin Kenny. Photograph: Niall Carson/PA Wire

Reflecting on the oppressive Ireland of mother and baby homes makes it easy to understand how Adolf Hitler was able to do what he did, the Dáil has heard.

Sinn Féin deputy Martin Kenny said that when he was growing up, “I often wondered about Hitler, the Germans and what happened to the Jews and how he was able to do what he did.

“If you sit and think about the kind of Ireland we had,” Mr Kenny said, “it is very easy to understand how people were able to do these things.”

The Sligo-Leitrim TD was speaking during a debate on the commission of investigation confirming human remains on the site of the former Tuam mother and baby home.

He highlighted the case of a woman born in Tuam whose earliest memory was of hunger. He said that she and other children “used to scrape the dirt off the walls and eat it”. Her childhood was one of fear and of the “very worst horrors we could imagine”.

Mr Kenny said the big irony is that everyone knows people in religious life who are very caring, who have been very helpful and who have done great things, “yet we have this scenario sitting alongside”.

He said the Taoiseach had spoken about how the nuns did not come and drag these children from their homes and that the children were given up.

These children “were always told they were the product of sin and it was all about sin,” he said. “It was an oppressed society, and the culture of that time was very much dominated by Catholicism and the Catholic Church.”

Everyone knew what was going on, Mr Kenny said. But they did not look; they were fearful. These children “were our people, they were the best of our people and Ireland let them down and we have to create a new society”.

What happened “ is just so horrific, so terrible and such a shame on Ireland”.

Mr Kenny warned the Minister for Children, Katherine Zappone, not to be “held back by some legal problem”. He said every kind of excuse would be made to as to why things could not be done. “These people were exposed to the greatest horror of mankind.”

It was time to do the right thing, he said.

“All these private for-profit health institutions that these orders are running should be taken from them forthwith and brought under public control,” he said. It would be “just for what they have done and for the fact that the State supported them in doing it”.

The TD also called for a halt to the mistreatment of “ children in direct provision and in the emergency homeless services, where this sort of stuff continues to be meted out to the same single mothers and their children, the poor and the less well off”.