McGuinness funeral to take place at scene of IRA-church clash 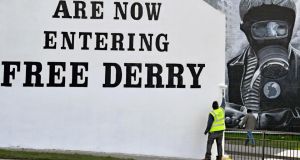 A man paints the “Free Derry” corner wall in the Bogside on Wednesday ahead of the funeral of former deputy first minister Martin McGuinness. Photograph: Jeff J Mitchell/Getty Images

St Columba’s Church in Derry, where the funeral of Martin McGuinness is to take place on Thursday, was the scene exactly 30 years ago this week of one of the most controversial confrontations between the IRA and the Catholic Church during the Troubles.

On March 24th, 1987, two masked IRA gunmen fired a volley of shots inside the church grounds during the funeral of IRA man Gerard Logue.

Two days earlier, Mr Logue (26) was shot when a weapon he was carrying accidentally discharged. He was found fatally wounded in an alleyway at the rear of houses in the Gobnascale area of the Waterside, close to his home at Rose Court.

The RUC deployed hundreds of armed officers along the route of a funeral procession from his home to the church. When the coffin arrived at the church for requiem Mass the officers took up positions immediately outside the church grounds in a bid to ensure that a volley of shots would not be fired over the Tricolour-draped coffin.

However, when the coffin was carried into the church grounds, two masked gunmen emerged from the crowd of hundreds of mourners and fired a volley of pistol shots over the coffin. Among those standing close to the coffin when the volley was fired immediately outside the church doors was Martin McGuinness.

The crowd applauded the volley of shots and two gunmen mingled with the mourners and avoided capture.

The then Bishop of Derry, Dr Edward Daly, convened a meeting of his closest clerical and lay advisers the following day to discuss the incident which had taken place inside the sanctity of church grounds.

The following week Bishop Daly issued a statement in which he stated he was imposing a ban on any paramilitary trappings such as black gloves and berets being brought into church grounds in the Derry diocese during Republican paramilitary funerals.

Following pressure from family members of the IRA members who died after the ban was imposed, the IRA eventually relented by agreeing to remove paramilitary trappings from the coffins of IRA dead prior to the coffins being brought into church grounds.