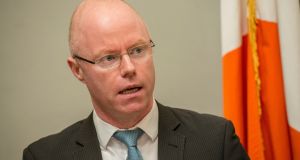 Stephen Donnelly has talked about the need for a Brexit minister in Ireland. Photograph: Brenda Fitzsimons

On the latest Inside Politics, Fianna Fáil’s newest recruit Stephen Donnelly talks about why he has never been more convinced of the need for the Government to appoint a Brexit minister.

Mr Donnelly, who has been Fianna Fáil’s spokesman on the issue for the last six weeks, lays out what Ireland’s priorities should be ahead of the triggering of article 50 by Britain next Wednesday and what demands should be made.

He also speaks about his decision to join Micheál Martin’s ranks, saying that while being part of the Social Democrats “did not work”, he still believes that the best way for him to achieve his political goals is from within a party, and Fianna Fáil is the best fit.

Asked about the party’s conservative stance on issues of conscience like the Eighth Amendment, Mr Donnelly - who is clear in his belief it should be repealed - said he has found there is a freedom within the party to advocate on such issues.