Government leaving victims of abuse in schools ‘high and dry’ 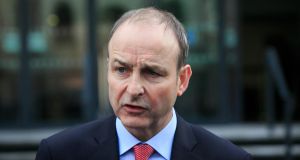 The Government has been accused of behaving in an appalling manner towards victims of child sexual abuse in primary schools.

Fianna Fáil leader Micheál Martin said the redress scheme established for victims of abuse in schools was a “ready-up and designed to limit accessibility”.

Mr Martin said it was quite shocking what many of these victims had gone through as he highlighted the case of a man who he said was abused by a Christian Brother and spent 17 years trying to seek justice.

He said the State fought this and the man had been in and out of the High Court and Supreme Court.

Mr Martin pointed to the outrage of the past number of weeks in relation to the treatment of children in mother and baby homes and foster homes. But he said at the same time “this is all going on under our noses and the Government is resisting a proper humane response”.

The Fianna Fáil leader was referring to the scheme established after Louise O’Keeffe brought a case to the European Court of Human Rights following her abuse by a teacher at her Co Cork school and the State’s rejection of responsibility.

Taoiseach Enda Kenny acknowledged that “the State has been cautious to put it mildly” but he insisted the European Court accepted that the State was responsible for particular cases only - where a child had been abused after a complaint had already been made and not acted on.

He stressed that the State was following the judgment made by the European Court of Human Rights.

But Mr Martin said “the bogus interpretation and application of the Louise O’Keeffe judgment is just shocking” and “cynical beyond belief”.

He told Mr Kenny to “stop adding insult to injury” and called on him to “try not put a fog around this”.

The Fianna Fáil leader said “we are victimising even more those who have already been abused” and that what was going on was a scandal.

“Many of these victims have been left high and dry.”

Mr Martin said the issue was not complex and what the State had done was say “how the hell do we limit this”.

He said that since the redress scheme had been introduced just seven out of 360 cases had been settled.