From the archives: Martin McGuinness - Profile of a Provo 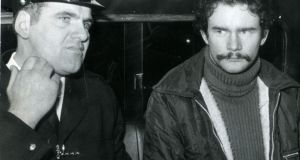 “You know how much life has changed when you’re having a Republican tea - a bottle of orange and a bap - in the back of a car, just a few minutes from your own home.”

Martin McGuinness, the 21-year-old O.C. of the Derry Provisional IRA, may have changed his life-style, but he is acutely embarrassed at popular press descriptions of him as “the boy who rules Free Derry.”

He was catapulted into the limelight at a press conference in Creggan estate last week, and since then the English papers have had a hey day writing about his “good looks, youth- and shy charm.”

An American TV man spent a wistful hour planning the scenario for a colour-film spectacular about him. “Jeez,” he said, “the boy would be hot on the coast. Can you see him, six feet tall in his dinner jacket, raising funds.”

His wish will presumably not be granted. The English journalist who romanticised Mr McGuinness was ordered out of town. He left immediately.

“I don’t feel like a big-shot, travelling around the area in a stolen Ford Avenger,” said Martin. “I have to do what the people want. They don’t treat me like I was something different. In fact one wee woman couldn’t understand, why I couldn’t go down to the police barracks to bail out her son who’d been arrested. I had to take her up to headquarters and arrange for someone else to do it.”

He joined the IRA after the Battle of Bogside in 1969. Initially he was with the Official wing.

“There was not a Provo unit in Derry then. The Officials approached me and for three months we attended policy and training lectures in a house in the Bogside. But they wouldn’t give us any action. All this time there was fighting in the streets and things were getting worse in Belfast. You could see the soldiers just settling into Derry, not being too worried about the stone-throwing.

“Occasionally, the Officials gave out molotov cocktails, which wouldn’t even go off, and I knew that after 50 years- we were more of an occupied country than we ever were. It seemed to me that behind all the politics and marching, it was plain as daylight that there was an Army in our town, in our country and that they weren’t there to give out flowers. Armies should be fought by armies. So one night I piled into a black Austin, me and five mates, and we went to see a Provo across the Border.

“We told him our position and there were several meetings after that. Then we joined. Nothing really happened until Seamus Cusack was killed, and internment came soon after. Then the Proves in Derry were ordered into fulltime military action. I gave up my job working in the butcher’s shop.”

His mother was panic-stricken, he said, when she found out he was in the IRA.

“A few months after I’d joined, she found a belt and beret in my bedroom and there was a big row. She and my father told me to get out of it, and for the sake of peace I said I would and they calmed down. But now they have to accept it . They’ve seen the British Army in action and they know I’d no choice.”

His mother, though, had started smoking again, which she hadn’t done, in years.

“I know her health has failed, and she’s always worrying about me. If I’m not around to tell her myself, I send her word that I’m all right, I don’t discuss my business with her, and she doesn’t ask.”

Martin’s mother was angry at the press reports of him.

“You’d think he was running around the area with a gun, telling people what they could and could not do. The only time I saw guns in this house was when the British Army raided it.”

She worries about him even more since Joseph McCann was shot in Belfast.

Since Martin’s picture appeared in the papers, every soldier in Derry knows what he looks like.

And when it’s all over - should it ever end - she worries about his job.

“His trade’s been interrupted. His father is a welder, his brothers are at the bricklaying and carpentering, but what will become of Martin? That’s why they’ll have to get an amnesty, so he can get back to work and not be always on the run.”

Martin himself doesn’t worry too much’ about what will come after. His aims are devastingly simple.

“I want a United Ireland where everyone has a good job and enough to live on.”

He has read a little, he said, since becoming a Republican and supported Socialist views “but the Officials are all views and not support. I wish we were getting more press coverage in Derry for out political beliefs, but we don’t have the talkers in our ranks. Still, the people support us, and that’s good enough.”

He wondered sometimes, he said, if Socialism would ever work out.

“I have a lot of respect for Bernadette Devlin, but I think maybe people are too greedy. I’d be willing to sweep the roads in my world and it wouldn’t seem like a bad job if they got the same wages as everybody else, but do you not think now that people are just too greedy. Somebody always wants to make a million. Anyway, before you can try, you have to get this country united.

“We’d make sure that Protestants are fairly treated. I don’t accept that we are sectarian. But you have to face facts that it’s the Catholics who’ve been discriminated against. The Officials go on about us all the time, but it was them that blew up the Protestant mayor’s house in Derry and shot Barnhill and John Taylor. Mind you, I’ve nothing against the rank and file officials. They’re soldiers, just like me, with a job do. That job, as far as I am concerned, is to fight the British Army.”

The Provisional’s took care, he said, not to harm innocent civilians.

“But sometimes mistakes are made. There was an explosion in Derry some time ago and I read afterwards that a man had been trapped in the basement. He lost a part of his leg and you read that he’s a cyclist and you feel sad. The worst I ever felt was Bloody Sunday. I wandered about stunned with people crying and looking for their relatives and I thought of all that guff about honour between soldiers.

“The British Army knew right well we wouldn’t fight them with all those thousands of people there, so they came-in and murdered the innocent. I used to worry about being killed before that day, but now I don’t think about death at all.”

If there’s a riot on he sometimes goes and throws stones.

“It relieves the pressure and it’s a way of being with my mates, the ones who have not joined the movement and I feel just ordinary again.”

“I suppose,” he added, “you think us Provos have no feelings at all just because we have no time to talk about it.”

Last week he talked publicly for the first time. His speech, to a wildly cheering crowd in the Brandywell, was very short and to the point.

“If Gerry Fitt and John Hume think they‘re going to sell the people out,” he said, “they’ve got another thing coming. It’s just not on.”

He looked very young as he spoke. He was probably not what Austin Currie had in mind last autumn when he warned the people that the possible imprisonment of MPs would create a need for “second-tier leadership”.

But the influential, middle-aged, middle-of- the-road Derry Central Citizens’ Council took sufficient cognisance of his leadership to go and have a talk with him about his ideas.

Afterwards they rejected Provisional proposals for elections in the city. Martin didn’t mind too much.

“I know they’re wrong,” he said. “I know it and I feel it when I go round the barricades and see the boys they called hooligans, and the men they called wasters, and the fellows that used only to drink doing things now they really believe in. Protecting the area, and freeing Ireland and freeing themselves.”