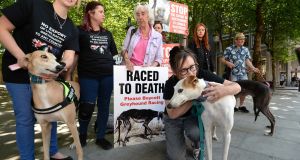 Independent TD Maureen O’Sullivan at a protest outside the Department of Agriculture against the alleged exploitation of greyhounds. File photograph: Cyril Byrne/The Irish Times.

A “ring of steel” is needed around the EU to prevent the export of dogs to third countries with records of animal cruelty, the Dáil has been told.

Minister of State for Agriculture Andrew Doyle defended his handling of animal welfare issues and the continuation of €16 million in annual funding to the Irish Greyhound Board after an RTÉ documentary showed that Irish greyhounds ended up in China and Pakistan, where it was suggested they faced cruel treatment.

The programme claimed overbreeding in the greyhound industry was leading to surplus dogs being culled or exported to Britain from where many were moved on to third countries. The documentary also highlighted significant cruelty in Ireland in the culling of dogs considered too slow for racing.

Independent TD Maureen O’Sullivan, a long-term animal welfare campaigner, said Italy and France had banned the export of dogs to China and Pakistan and Ireland should do likewise.

She also claimed it was a “majority of greyhound owners who are abusive towards their animals” and that the Irish Greyhound Board in 2011 sought permission to export the dogs.

Ms O’Sullivan also said the board “was aware that injured dogs were being forced to run in races and were being given morphine so they could run. This industry is an absolute disgrace”.

The Dublin Central TD said a letter written to the Minister in 2016 from the three main animal welfare groups in Ireland, stated that “any greyhounds going from here to the likes of Macau were going to certain death, not to mention the cruelty and abuse suffered beforehand”.

Mr Doyle will this week meet the chair and board of the greyhound body to discuss welfare standards. He said Ireland could ban the export of dogs to China but “unless every country we export to that has good welfare standards, adopts the same approach, it will not be effective”.

Most animals are exported via the UK and officials are in talks with their British counterparts to “re-emphasise the need for the UK to have stricter controls on how animals exit the country”.

If every country, such as all current 28 EU members, “has the same ring of steel around their exports, then no dogs will end up in countries such as China and Pakistan.”

The Minister insisted that “we cannot do that unilaterally. We need co-operation and that is why we need to engage with the international greyhound forum to make sure that becomes a reality.”

Solidarity TD Paul Murphy said protections in places like Macau in China were almost non-existent and “we have horrific situations like boiling alive of greyhounds when they are no longer useful.

Mr Doyle said he had worked hard to bring the industry “into focus and into shape” and he was confident animal welfare legislation passed this year would improve governance of the industry and strengthen regulatory controls.