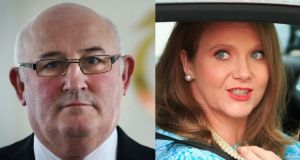 Gerard Craughwell (Ind) said his identity on Facebook was stolen last weekend, while Catherine Noone (FG) said she received a tweet this week saying she ‘should be buried alive’ with a reference to murdered MP Jo Cox. File images: Cyril Byrne/The Irish Times/Gareth Chaney/Collins

One Senator revealed on Wednesday that he was the victim of identity theft on social media, while another told the Seanad she received a death threat.

Both incidents were said to have taken place in the past week.

Independent Senator Gerard Craughwell said his identity on Facebook was stolen last weekend and the person who committed the theft used his photograph and profile to copy “some pretty horrendous messages” to members of the public on his Facebook page.

He condemned Facebook’s response because it refused to let him know who stole his profile. He said the tech company said “we removed a profile content because it doesn’t follow our community standards”.

Facebook said it would let the profile owner know that the content had been removed “but not who reported it”.

Senator Craughwell told the Seanad the person who stole his identity “masqueraded as being me until they were caught. I have no recourse whatsoever to find out who these people were”.

Fine Gael Senator Catherine Noone spoke of a death threat she received after she posted “a positive tweet about the Taoiseach’s polling”.

Ms Noone said she received “over 100 of the most negative comments” including one that said: “Do you remember what happened to MP Jo Cox? You should be buried alive with the rest of your parasitic colleagues.”

Ms Noone said “that’s an actual threat” as the tweet referred to the British Labour MP who was murdered by a far-right extremist in the run up to the Brexit referendum.

The senators were speaking during debate on the Children’s Digital Protection Bill introduced by Independent Senator Joan Freeman.

Ms Freeman stressed that her legislation “is not a general online protection Bill but specifically about children and harmful content”.

She said “I’m talking about taking down sites that provide harmful content, for example, a site that tells a child to do a certain task every day for 50 days resulting on the 50th day that they’re told to take their own life.”

The ban would also apply to “sites that promote deprivation of food. I’m not talking about online bullying or anything like that but particular sites.

“This is a very simple piece of legislation that could be very simply and easy implemented,” she said.

Minister for Communications Richard Bruton said he would be transposing significant elements of Ms Freeman’s Bill into legislation that he was preparing which would be more legally robust.

Ms Freeman told the Minister however that “whatever you’re going to provide is so vast there will probably be problems along the way.

“I’m just asking for a very simple Bill that will help children right now, not when all the other things have to be passed through.”

The House passed the Bill without a vote.