New scheme between An Post and independent booksellers announced 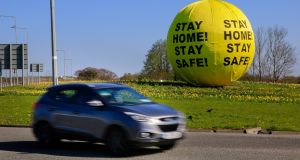 The Government has insisted there has been no noticeable increase in traffic volumes on national roads despite anecdotal evidence of increased public activity and official figures showing increased volumes of up to 7 per cent.

At the Government’s morning Covid-19 briefing, assistant secretary general at the Department of Taoiseach Liz Canavan said that Transport Infrastructure Ireland has carried out an analysis of the volume of traffic on roads and has found no significant increase in traffic.

“We know that there is some anecdotal evidence circulating this week in relation to an increase in the number of people on our roads,” Ms Canavan said.

“Transport Infrastructure Ireland operates a comprehensive network of traffic counters on national roads right across the country. After the announcement of the travel restrictions on the 27th of May there was a reduction in traffic volumes across the national road network of between 65 and 70 per cent compared to the corresponding dates into 2019.”

Ms Canavan said that at weekends this reduction was greater again at around 87 per cent.

The Irish Times reported on Wednesday that traffic numbers on the State’s main roads and motorways has risen by up to 7.65 per cent over the last two weeks. Data from traffic counters, which are set into roads and monitored daily, show traffic volumes climbed on routes into the cities of Dublin, Cork, Limerick and Galway, with the largest volumes in the east of the country.

But Ms Canavan on Thursday said traffic volumes were in line with the previous weeks since the restrictions were introduced. Spot checks on roads also show no noticeable increase, she insisted.

“Most are within 5 per cent of the average weekday volumes under the current restrictions. The news is highly encouraging as it reinforces the fact that the vast majority of people are continuing to observe the essential public health advice for which we are very grateful,” she said.

The Government has also announced a new initiative between An Post and independent booksellers which will see a special postage rate of €2.95 per package for posting of books up to 10kg.

On the issue of the spread of Covid-19 in direct provision centres, the Department of Justice has reduced the numbers of residents in rooms to ensure that there are no more than three single persons per room. Ms Canavan said the department intends to continue this policy when the crisis is over.

In education, the results of the HPAT, the exam taken by students who wish to enter medical fields, have been deferred until after the Leaving Cert.

Meanwhile about 48,100 employers have applied for the Government’s temporary Covid-19 wage subsidy scheme