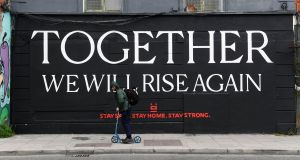 Rent freezes and other temporary actions could be extended if the pandemic continues into June, as experts anticipate. Photograph: Aidan Crawley/EPA

A confidential Government memo has warned the next phase of the coronavirus crisis has the potential to be “far more divisive” as the full implications of the pandemic sink in with the public.

The note comes as the Taoiseach and Minister for Finance indicated the Government is to consider extending Covid-19 measures such as the rent freeze and the ban on evictions, but will assess how special welfare payments can be tapered off in the coming months.

In a note sent to the Cabinet from the Department of the Taoiseach this week, Ministers were told that while the initial stage was “both swift and unprecedented, and was experienced by everyone together and in a relatively unified spirit”, this may change as the long-term effects come into play.

“This includes unemployment, reduced income, increased debt, closure of businesses, reduced educational opportunities, restrictions on movement and social interactions, and ultimately the loss of loved ones.”

The note, the tone of which was described as “jaw-dropping” by sources, outlined the challenges ahead, such as the difficulty of opening some sections of the economy and not others, reducing income supports and tightening procedures for those entering the country, as well as opportunities.

It also touched on political accountability, in what some were interpreting as concern about a caretaker government dealing with such a crisis.

“The issue of government formation and the role of the Oireachtas is outside the remit of this note. However, given the scale and impact of the decisions that will have to be taken in the coming months, it would be important that measures are put in place to enable proper political debate and public accountability.”

Taoiseach Leo Varadkar suggested on Wednesday afternoon that rent freezes and other temporary actions could be extended if the pandemic continues into June, as experts anticipate.

Earlier, Minister for Finance Paschal Donohoe said the Government would consider “tapering and changing” the special €350 pandemic payment when the initial 12-week period runs out in mid-June. There is growing concern in the Department of Finance that the current unprecedented State supports are unsustainable in the medium term.

Mr Varadkar said that while no decision has yet been made on extending certain Covid-19 measures, “a lot of things were put in place for a 12-week period (such as) welfare measures, employment supports, the rent cap and also the ban on evictions.

“It was done in the anticipation that this pandemic, if you like, would last for less than 12 weeks. Obviously if it goes on for longer we will have to give consideration to extending a lot of those different temporary actions.”

It comes as another 49 coronavirus-related deaths were announced by State health officials and a further 631 new cases of the disease were reported.

This brought the death toll to 769 laboratory-confirmed coronavirus-related deaths in the State and the total number of cases to 16,671. The Department of Health’s National Public Health Emergency Team said in addition there was a total of 113 “probable or suspected” coronavirus-related deaths (up from 108 yesterday), including 102 in nursing homes.

The number of coronavirus-related deaths in hospitals in Northern Ireland has risen to 250, according to figures released on Wednesday.

The State’s chief medical officer Dr Tony Holohan told reporters that based on current figures on new Covid-19 infections, the team would not be recommending any change to the restrictions that remain in place until May 5th.

“There should be no anticipatory slacking-off in advance of May 5th. We have a way to go; you have seen the number of cases,” he said.

Meanwhile, the Government’s new childcare proposals for frontline workers have been sharply criticised by nurses who said they are “worse than irrelevant”.

Under the plan, the partners of healthcare workers can avail of paid leave if they work in the public sector.

Those who are lone parents or whose partners do not work in the public sector may have to wait until May 5th or beyond for support due to ongoing health concerns raised by the National Public Health Emergency Team (NPHET).

The Irish Nurses and Midwives Organisation (INMO) said the proposals would “do nothing for the vast majority of nurses and midwives”.

It said many nurses and midwives were lone parents, or had partners who were also working in frontline services or who were not in the public service.

The union said that “in practice even the small number of those who could benefit from the scheme may find that their partners are performing essential duties and cannot be released for childcare”.

INMO general secretary Phil Ní Sheaghdha said “this is a surprisingly old-fashioned concept of family needs. It will not resolve the issues faced by the vast majority of nurses and midwives, offering a limited solution only to those with partners in some public sector work.”

Mr Varadkar acknowledged that the childcare solution “really only works where it is a public sector household” and said it was not an adequate answer for other households.

He said NPHET still has “reservations” about using childminders to go into the homes of frontline workers but said this is something which could be considered after May 5th as part of any easing of restrictions.