Love in the time of Covid-19: A closed border can’t stop this elderly couple

A pair of divided lovers, aged 89 and 85, have found a romantic way to keep in touch 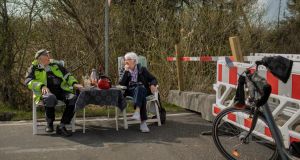 She drives from the Danish side, in her Toyota Yaris. He cycles from the German side, on his electric bike. She brings the coffee and the table, he the chairs and the schnapps. Then they sit down on either side of the border, a yard or two apart. And that is how two octogenarian lovers have kept their romance alive despite the closure of the border that falls between his home in the very north of Germany and hers in the very south of Denmark.

Every day since the police shut the border to contain the virus, Karsten Tüchsen Hansen, an 89-year-old retired farmer, and Inga Rasmussen, an 85-year-old former caterer, have met at the Mollehusvej border crossing to chat, joke and drink, while maintaining a modicum of social distance.

“We’re here because of love,” said Tüchsen Hansen, when I visited them last week. “Love is the best thing in the world.” Then he poured another glass of schnapps.

The pair typically cooked a daily meal together, chatting in a mixture of German and Danish. Then Rasmussen usually stayed overnight before returning to her own home in Denmark for a few hours the next morning

The couple’s unlikely romance began in Denmark two summers ago, in slightly less sentimental fashion. Tüchsen Hansen, carrying a grand bouquet of flowers, was on his way to drop in unannounced on another elderly Danish widow he’d known for decades. But before he reached her house, he met Rasmussen as they both were in line at a strawberry stand beside a traffic circle.

Rather taken, he decided against visiting the first woman. Instead, Tüchsen Hansen impulsively gave the flowers to Rasmussen. He then invited her to dinner in Germany and the pair soon grew close, much to the surprise of Rasmussen’s three daughters.

“Never marry a German,” Rasmussen had often warned them as teenagers – not from xenophobia, but because she wanted them to live close to her home. “Now they say to me: Mother, what are you doing?” Rasmussen said. The match was also surprising for more poignant reasons. Both had been widowed in recent years, after more than six decades of marriage for each, and both thought their days of companionship had ended. “I never dreamed this would happen,” Rasmussen said.

But against all expectations, Rasmussen began to visit Tüchsen Hansen every day, thanks to European regulations that had for years allowed free movement between countries like Denmark and Germany. The pair typically cooked a daily meal together, chatting in a mixture of German and Danish. Then Rasmussen usually stayed overnight before returning to her own home in Denmark for a few hours the next morning.

That happy routine came to an abrupt halt on March 13th, when the Danish government announced it would close its borders the next day to all but people travelling for work. Frightened she would be locked out of her homeland, Rasmussen hurried back to her house in Denmark, a 15-minute drive away.

Neither knew when they’d next hold the other’s hand. But then they hatched a plan.

On a quiet lane that winds through the flat farmland between their two homes, a few hundred metres from where Tüchsen Hansen was born, the police blocked the road only with a flimsy plastic barrier. It’s about halfway between their two homes, so Rasmussen and Tüchsen Hansen have met there for a picnic every afternoon since the shutdown, usually at 3pm.

In gentle deference to medical advice, they try to avoid physical contact. “The worst thing is we can’t embrace each other,” Tüchsen Hansen said. “We can’t kiss. We can’t make love.” But they have found other ways to show their affection.

Each day, Tüchsen Hansen brings Rasmussen a present. When I visited, it was a bottle of merlot (although Rasmussen drinks only coffee until the Toyota is safely parked back at home). In return, Rasmussen brings biscuits, a cake and sometimes even a cooked lunch. “If there’s respect and acceptance, then sex is not so important,” Tüchsen Hansen declared.

The Danish police have threatened to fine them if they stray over the border, Tüchsen Hansen said. But galvanised by the presence of a journalist, Tüchsen Hansen clambered past the plastic fence to point out an old border stone hidden in the bushes. It was another moment of poignancy.

I think it brings people some hope, a little bit of light in the darkness. You have these elderly people who’ve found a way out

In the early 20th century, the border lay much further to the north. But in a plebiscite on March 14th, 1920, the residents of what was then the northern tip of Germany voted to join Denmark. That decision shifted the border southward to this stretch of farmland – as denoted by the old stone in the bushes.

In 2001, that border effectively disappeared again, as Denmark joined a border-free zone within the European Union. But then on March 14th, 2020, exactly 100 years after the plebiscite, the border barriers were erected once more.

“My parents saw when the stone was installed,” Tüchsen Hansen said. “Now I see these barriers go up.”

The Danish mayor of a nearby town, Henrik Frandsen, first noticed the couple’s routine. Cycling along the border 10 days after it was closed, Frandsen struck up a conversation with them. Touched by their story, he later posted a picture of them on Facebook.

Within days, they had become regional celebrities, the focus of several reports in local newspapers and radio stations.

“I think it brings people some hope, a little bit of light in the darkness,” said Frandsen, who cycled over again to introduce me to the couple. “You have these elderly people who’ve found a way out.”

As a result, the couple’s picnic spot has become the site of a minor pilgrimage. Journalists and residents from both sides of the border visit the couple most afternoons. When I turned up, a German reporter was already there, and a Danish couple arrived soon after, delighted to find the story was true.

But the couple has received one visitor with slightly more mixed feelings. It was Kirsten Hansen, the woman to whom Tüchsen Hansen had originally planned to give the bouquet, two summers ago. She had not known about Tüchsen Hansen’s amorous intentions:

He did not tell her he had intended to visit, and in any case, he never turned up. She only learned about the near miss from the flurry of recent news coverage.

“Hey!” she said, laughing. “Those flowers were meant for me!” – New York Times