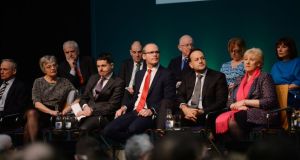 Members of the Cabinet on stage for the launch of Project Ireland 2040, at Sligo’s Institute of Technology. Photograph: Alan Betson/The Irish Times

Despite a snazzy unveiling in Sligo followed by slick infomercials and a chorus of praise from Government TDs, there wasn’t much talk of the new National Development Plan in Leinster House this week.

There isn’t much return for Opposition Deputies from attacking an ambitious €116 billion plan that seeks to improve the lot of citizens.

But there was plenty of scope to question the cost of the launch and the publicity hoopla that went along with it.

The Taoiseach reminded Micheál Martin in the Dáil on Tuesday that Fianna Fáil was also very fond of razzmatazz when it came to launching national plans. Leo Varadkar said the party had set aside €1 million in 2007 to communicate details of the last development plan to the public, and this included advertising.

Micheál hotfooted it back to the chamber the following day with a correction. “Approximately €340,000 was the amount spent on the launch of the 2007 plan . . . This does not compare with the amount spent on Friday, which was by far the most expensive and extensive ever by a Government.”

The lovingly choreographed launch in Sligo’s Institute of Technology should yield lots of impressive clips for harvesting when the general election rolls around – Ministers marching in single file towards the impressive platform, the Taoiseach escorted into the hall by the president of the Students’ Union when everyone was seated, the flowery speeches, the fancy graphics and backdrops, the sophisticated lighting, the music, the packed venue and the young people planted in the audience to ask hilariously searching questions of Ministers about their “vision”.

“You’d get harder questions at a Fine Gael ardfheis,” snorted one audience member.

Nobody would be surprised if Leo and co were to produce a special video of the event to show to supporters across the country. Or maybe edited highlights of the big day might be shown at the National Development Plan roadshows – 40 of them are planned for venues all over the country.

Unfortunately, much to the consternation of everyone involved, it seems that this may not be possible now. For all the Government planning on the PR plan for the plan, one vital element was overlooked.

When the show started, nobody pressed the record button. As a result, the Government doesn’t have any of its own footage from the launch.

Don’t you just love it when a plan comes together?

But what about rural Ireland?

The rural Independents group is not pleased with The Plan because it is not “rural-proofed”.

Although Michael Collins was impressed by the “most incredible launch” and wondered who paid for it. But that was about all.

“I’m not as enthusiastic about the whole report, however,” said the Cork South-West TD, who lives in Schull. “In fact, I would even say that the most relevant piece of the 170-page document to me is a picture of a member of my staff, Maureen McGrath, on page 45, dancing a set at a local festival in Clonmel. ”

And that, he said, was the only thing he could relate to in the plan concerning rural Ireland or west Cork.

So what about urban Ireland?

The TD for Dublin South-West was one of many who took the opportunity during the week to brandish double-page spreads from various national and regional publications, all of them lauding the development plan in bright, newsy articles.

He was surprised when he picked up his Evening Herald and found a two-page spread which, to all intents and purposes, “appears like normal articles . . . but at the top is the little giveaway: ‘In partnership with the Government of Ireland.’”

In the words of Christy Dignam, I suppose I can ask, ‘How can I protect you from this crazy Government?’, as opposed to this crazy world.

The copy was all about Finglas and what the plan will do for the area, and it included interviews with economist Constantin Gurdgiev, Aslan frontman Christy Dignam and a local youth worker.

“Did any of these three people who feature in this article, did they know that this was an advertising feature that they were contributing to or did they know that this was part of the Government’s communication strategy? Was anybody paid to contribute to this article? How much did this cost, in a major national newspaper – a double-page spread?” asked Lahart, wandering far from his bailiwick of Rathfarnham and Knocklyon.

He was intrigued, and for good reason.

“This is a party political advertisement in a national newspaper in what is a marginal constituency in which the sitting Fine Gael TD is fighting to hold on to his seat. So this is very, very targeted political advertising that is, essentially, being paid for by the taxpayer.”

The hard-working Noel Rock will indeed have to work hard to retain his Fine Gael seat in Dublin North-West – a constituency which includes Finglas, the subject of the glowing Herald advertorial which annoyed Lahart so much.

He turned to Aslan for inspiration.

“In the words of Christy Dignam, I suppose I can ask, ‘How can I protect you from this crazy Government?’, as opposed to this crazy world.”

Party rivalry is just the ticket for FF

Congratulations to Fianna Fáil’s Fiona O’Loughlin, who was selected to run for the party in the general election at the Kildare South convention last weekend.

O’Loughlin is a first-time TD who was second past the post in the three-seater last time out, when Martin Heydon, chairman of the Fine Gael parliamentary party, topped the poll. She was returned just ahead of colleague and long-serving TD Seán Ó Fearghaíl in a tight battle. As Ceann Comhairle, Seán won’t have to worry about re-election as he will be automatically returned to the Dáil.

Kildare South gained an extra seat when the boundaries were redrawn, so even though there will be four TDs after the next election only three berths are up for grabs.

O’Loughlin and Ó Fearghaíl are both from Kildare town and their rivalry is well known within the party.

No doubt Seán will have watched the convention with interest, although as Ceann Comhairle he remains scrupulously above politics.

O’Loughlin’s only opposition for the nomination was Cllr Suzanne Doyle, a long-time supporter of Ó Fearghaíl who was co-opted onto Kildare County Council in 2003 after his election to the Dáil the previous year. At Sunday night’s convention in the Keadeen Hotel, O’Loughlin won the vote by 169 to 87.

However, it is expected that headquarters may add a second name to the ticket, with Suzanne Doyle and local mayor Martin Miley in the hunt.

Harris did well on his first outing: confident, fluent and robust in his replies

But there were some raised eyebrows in the party in the run-up to the convention when Ms Doyle’s election literature included a ringing endorsement from party member Mary Clare Ó Fearghaíl, wife of Ceann Comhairle Seán.

She declared: “I am supporting Suzanne’s candidacy for Dáil Éireann because . . . her loyalty to Fianna Fáil and my husband’s campaign over many years has been unfaltering.”

Harris is in good health at Leaders’ Questions

There was a quiet debut for Minister for Health Simon Harris in the Dáil on Thursday when he took Leaders’ Questions for the first time since he joined the Cabinet in 2016.

This is quite a prestigious gig, with Tánaiste Simon Coveney usually deputising for the Taoiseach on Thursdays. When he isn’t available, Cabinet veteran and Minister for Education Richard Bruton tends to step in. So Harris, at the age of 31, must have been chuffed to get the call to preside over the chamber’s main setpiece of the day.

The little rift which opened between Varadkar and Harris after the leadership election, when Harris supported the Taoiseach’s rival, Simon Coveney, appears to have healed.

Harris did well on his first outing: confident, fluent and robust in his replies. But then, as Minister for Health, he was probably relieved to have to deal with questions on non-health issues. Brexit, mortgages, vulture funds and school places must have been a dawdle in comparison.

It had been due to finish a number of weeks ago, but Mattie McGrath protested vehemently that a number of TDs who wanted to speak on the issue had gone home and should not be deprived of their right to speak on such an important matter. Further time was allocated, for which there were just three speakers: Sinn Féin’s Pearse Doherty, Independent Michael Fitzmaurice and the Minister.

The endless fascination with Leo Varadkar’s Strategic Communications Unit (SCU) continues, with queries about it becoming a weekly feature of Leaders’ Questions.

And every week Leo tells them to move on, there is nothing to see.

The SCU is part of the Department of the Taoiseach. Here’s what Leo read out about the number of people who work for him: “With the exception of politically appointed staff such as special advisers, staff assignment, appointments and recruitment in my department are dealt with by the secretary general and the senior management of the department. There are currently 206.1 whole-time equivalent staff employed in my department,” he said, before hesitating for a moment, a puzzled look on his face.