Tillerson confirms to Coveney US will appoint NI special envoy 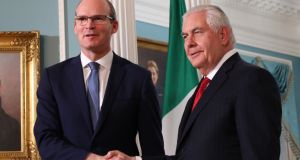 The United States is preparing to appoint a special envoy to Northern Ireland the US secretary of state Rex Tillerson has confirmed.

Responding to questions from reporters ahead of a meeting with Tánaiste and Minister for Foreign Affairs Simon Coveney at the US state department in Washington, Mr Tillerson said: “We’re giving some names to the White House as we currently speak.”

The position has been unfilled since the election of President Donald Trump. Confirmation that the White House is preparing to fill the role comes amid a renewed focus on Northern Ireland on Capitol Hill given the twin challenges of Brexit and the ongoing political impasse in the North.

This week a bipartisan group of 22 members of Congress called on the Trump administration to appoint a special envoy to the region.

Mr Coveney raised the issue, and the particular challenges to transatlantic relations posed by Brexit, during a series of meetings on Friday in Washington. In addition to his bilateral meeting with secretary Tillerson, he also met with President Trump’s senior advisor and son-in-law Jared Kushner and White House foreign policy advisor Fiona Hill.

Confirmation that the position will be filled will be welcomed by the Government and comes ahead of Taoiseach Leo Varadkar’s visit to the US capital next month as part of the St Patrick’s Day celebrations.

“We made it very clear that we would like to see a special envoy to Northern Ireland again. I think it would be helpful,” Mr Coveney said. “We would also like to see an Irish ambassador named. Obviously the St Patrick’s Day celebrations and events would be a great opportunity to bring some clarity there.”

He said the importance of US engagement was “less about Brexit and more about trying to ensure that political structures and the implementation of the Good Friday agreement continued to be bedded down” adding that he had updated the administration about the challenges involved in restoring devolved government in Northern Ireland.

The first US special envoy to Northern Ireland, Senator George Mitchell, was appointed in 1995. Successive appointees, including Richard Haass and Gary Hart, have played a central role in the Northern Ireland peace process, but the position has remained unfilled since the election of Mr Trump.

In a statement on Thursday, a cross-party group from US Congress said that “now is the ideal time” to name an envoy, given the current critical juncture in Northern Ireland politics.

“With the breakdown of cross-border talks in Belfast last week aimed at restoring the power-sharing institutions, we once again urge President Trump to name a new Special Envoy to Ireland at the earliest opportunity,” said the statement issued on Thursday which was signed by 22 members of Congress – both Democrat and Republican.

“While we remain hopeful that an accommodation between the parties can still be reached, the appointment of a Special Envoy would help prevent further political instability and send a strong message around the world that the United States remains fully engaged in the region.”

On the ongoing political impasse in Northern Ireland, Mr Coveney said that intensive contacts would continue between the Irish and British governments over the coming days in an effort to restart negotiations next week on restoring power-sharing in Northern Ireland.

Mr Coveney also said he had a productive discussion with Mr Kushner at the White House. Mr Trump’s son-in-law has taken a leading role in US policy in the Middle East under the Trump administration, including the controversial decision to move the US embassy from Tel Aviv to Jerusalem.

“There is a hope and an expectation that the US will be bringing forward a new initiative on the Middle East,” said the Tánaiste. “It is important that we build relationships with the personalities that are going to be bringing any new initiative forward.”

He said it was vital that the Middle East peace process resulted in a “balanced negotiation and outcome for both sides.”

“There are very legitimate Israeli security concerns in relation to any new initiative and there are of course very legitimate aspirations for Palestinians to have their own independent state that can function and operate in the future. We want to achieve that.”