Harris calls on PTSB to appear before Oireachtas committee 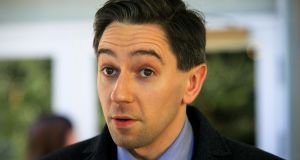 Permanent TSB should appear before the Oireachtas finance committee to discuss its sale of €3.7 billion worth of residential mortgage loans, Minister for Health Simon Harris has said.

“I think it is time to see a little bit of humility from our banks, which the taxpayers in this country have supported through very difficult times,’’ he added.

It is understood the bank is likely to decline the invitation, citing the confidentiality of sale negotiations.

The Minister made his remarks during heated exchanges with Sinn Féin finance spokesman Pearse Doherty in the Dáil on Thursday.

Mr Harris said there would be time to engage in the House on the issue and for the bank to consult Minister for Finance Paschal Donohoe.

“But we do also have to be truthful with people ,’’ he added.

He said: “We have to recognise the fact that we have a bank in this country that, despite the recovering economy and almost in full employment, has amongst the highest ratio of non-performing loans on its loan book in the eurozone.’’

He said when members of the Dáil in the past ignored regulatory advice regarding the banks, it had led to the Irish people bearing very heavy consequences and deep scars to this very day.

“There is time here to work our way through his,’’ he said.

Mr Doherty claimed the train had left the station in terms of the sale.

“These are vulture funds and the problem is that there is a perception out there that, by regulating them, everything would be okay,’’ he said. “It will not be okay.”

Mr Harris said it was simply false to say “the train had left the station”, given the loans had not gone on the market.

Mr Harris said there were parties in the House who had told people, through difficult and dark years, that their homes would be repossessed, a second bailout would be required and that Ireland should go the way of Greece and send the troika home.

“It seems that some parties in this House might have changed their leader but not their policies,’’ Mr Harris said, in a reference to Sinn Féin.

Mr Doherty said vulture funds do not offer options to borrowers and they should be punished if they broke the law.

He said the Minister should lift the phone and talk to the bank.

Mr Harris said Mr Donohoe had prudently asked the Central Bank to provide him with further advice and guidance on the current legislation and regulations surrounding sales.