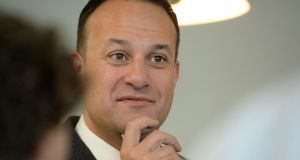 Leo Varadkar: “I thank [Alison McCormack] for her bravery in coming forward and in making her case public so that lessons can be learned and mistakes not repeated,” the Taoiseach said. Photograph: Cyril Byrne

Taoiseach Leo Varadkar has expressed his deep regret at the treatment by St James’s Hospital in Dublin of a woman whose cancer was misdiagnosed.

Mr Varadkar made his comments in the wake of the RTÉ Investigates programme which reported the case of Alison McCormack who was first diagnosed at St James in 2010 with breast cancer.

The case was raised by Sinn Féin health spokeswoman Louise O’Reilly who said the pathologist involved in the case had a 22 per cent rate of misdiagnosis.

Ms O’Reilly said that when Ms McCormack’s cancer returned the hospital knew about the misdiagnosis since February 2013 but only informed the patient nine months later.

The cancer had spread to the lymph nodes of her arm and neck and Ms McCormack “had to ask questions as to why her cancer had returned”, Ms O’Reilly said.

“This woman lost nine long months. Ms McCormack, as a cancer patient, had to go and look for the truth.

Mr Varadkar said he had not seen the programme but he had read about Ms McCormack’s case. “I deeply regret the way in which she was treated by our health service, by St James’s Hospital and by members of my own profession.”

He added: “I offer her my sympathies. I thank her for her bravery in coming forward and in making her case public so that lessons can be learned and mistakes not repeated.

“I also wish her the very best in her recovery.”