Government should ‘close Dáil bars and lead by example’ 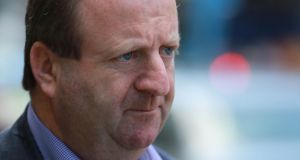 Michael Collins has said the Government ‘keeps attacking the drinks industry’ yet the Dáil keeps its own two bars open. Photograph: Nick Bradshaw

The Government should lead by example and close the two bars in Leinster House if it wants to start to deal with harmful drinking, Independent TD Michael Collins has said.

Mr Collins criticised the Government because it “keeps attacking the drinks industry” and said the Government’s attempts to deal with Ireland’s alcohol crisis should “start at home”.

The Cork South-West TD said Leinster House was the politicians’ place of work and “home” – people elsewhere went to work and there was no bar at their place of work.

“We don’t need the Dáil bars” – the public bar and the bar used exclusively by current and former TDs and Senators – and if the Government was serious about its attempts to deal with harmful drinking in Ireland then it should lead by example and “close the Dáil bars”, he said.

But Fine Gael TD Peter Fitzpatrick said that, in seven years in the Dáil, he had never seen anyone abusing alcohol in the bar.

They were speaking on the second night of the Dáil debate on the controversial Public Health (Alcohol) Bill which seeks to address Ireland’s alcohol crisis.

The Bill introduces minimum unit pricing, provides for separation of alcohol from other products in supermarkets and other retail outlets, brings forward a broadcasting watershed (which means advertising for alcohol cannot be aired before 9pm) and provides for strict health warnings on labels including links with cancer.

Labour health spokesman Alan Kelly highlighted the radio advertisement which depicted hungover parents on a Saturday morning who could not get out of bed to bring their children to the park as they had promised.

He said it was a “very true story that goes on in homes in every county” at the weekend and in some cases during the week too and it had long-term consequences for families.

Mr Kelly, however, questioned the introduction of the proposed cancer warnings on alcohol products. He said he did not believe it would “cut the mustard” in terms of European law because of the impact on competition and that any progress on health warnings should be done at a “pan-European level”.

A number of TDs hit out at the level of lobbying by the alcohol industry. Solidarity TD Mick Barry said “university students of the future might well do theses on the lobbying campaign by the drinks industry to take the teeth from this Bill and water it down”.

Independent TD Catherine Connolly highlighted the legislation brought in over the years and never implemented. “It is an offence for a publican to serve alcohol to somebody who is intoxicated. It is an offence to drink on the streets of Galway. We brought in bylaws to prohibit drinking on the streets of Galway and immediately we had to make exceptions.”

Social Democrats TD Róisín Shortall said she was very concerned at the “ghost relationship” between former Fianna Fáil and Fine Gael politicians and staff who had lobbied for the drinks industry on the Bill. She said they were “going back and forward” to Leinster House and this was entirely inappropriate. She said there had to be a “significant cooling-off period” before such lobbying because there was a “clear conflict of interest”.

Ms Shortall, a former minister of state, said the alcohol lobby had done everything “ to stymie, misrepresent, confuse, delay and kill off” the strategy to deal with substance abuse, and because of this lobbying a decision was taken to ignore alcohol sponsorship of sport and music events.