Solidarity-People Before Profit Bill to go before Dáil 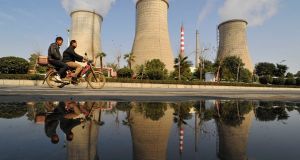 People Before Profit TD Richard Boyd Barrett: ‘We have to keep 80 per cent of all known fossil fuels in the ground if we are to have any chance of fighting climate change.’ File Photograph: Reuters

A move to ban the issuing of fossil fuel exploration licences in Ireland features in a proposed Bill to be put before the Dáil by Solidarity-People Before Profit.

The Bill’s backers hope the level of cross-party support achieved last year, which resulted in a ban on fracking in Ireland, will be secured for their proposed legislation.

The Petroleum and Other Minerals Development (Amendment) Climate Emergency Measures Bill 2018 is due to be debated during Private Members Time on Wednesday.

Labour and Green Party TDs have indicated they will support it, while there has been no formal response from Fine Gael. Fianna Fáil, in a tweet from Deputy Timmy Dooley, said it would support the Bill.

The Bill would categorise current atmospheric levels of CO2 as “an emergency” and on that basis call on the Government not to issue any new fossil fuel exploration licences – France, Costa Rica and Belize have already implemented similar measures.

At a press briefing, People Before Profit TD Richard Boyd Barrett, said: “We have to keep 80 per cent of all known fossil fuels in the ground if we are to have any chance of fighting climate change.”

Their “pretty simple and modest” Bill would mandate the Government to stop issuing new licences while carbon in the atmosphere registers over 350 parts per million and would declare “a climate emergency”, necessitating an appropriate response. “Currently, there is over 400ppm in the earth’s atmosphere,” he added.

Mr Boyd Barrett said the Bill, drawn up by TD Brid Smith, was in line with the Government’s stated position on national adaptation to climate change, its national mitigation plan, its “transition objective” in reducing greenhouse gas emissions and “support in principle, if not practice for the Paris Climate accord”.

While its response on climate to date was “more rhetorical than practical”, with special pleading in Europe on agriculture, supporting the bill would resonate hugely in an international context, he said.

Solidarity TD Paul Murphy, said: “Climate change is not something for future generations to worry about. It is a threat to people now.

“If fossil fuels continue to be burnt at the current rate, we will break through the 2 degree level which was agreed at Paris. There will be an average global temperature increase of around 5 degrees.”

There was a need for massive public investment in green, renewable energies and in public transport to seriously reduce emissions and the reliance on fossil fuels, he said.

“The Irish Academy of Engineers estimates that to do this effectively would cost about €35 billion over the next 12 years. This requires major, radical action now rather than the lip service which has been paid to it so far.’’

The Bill is being supported by the Not Here, Not Anywhere campaign group; Friends of the Earth Ireland and a number of other environmental groups including An Taisce and Trócaire development agency .

Acknowledging the current ecological crisis as a climate emergency was overdue, said Ciara Barry of Not Here, Not Anywhere. “This is not something we can just sweep under the carpet, not something we can renegotiate with the EU. This is the biggest threat of our time and our political system needs to start treating it as such.”

FoE Ireland director Oisín Coghlan added: “Supporting this Bill is not a vote to flick the light switch off but to shine a light on the path to a fossil-free generation. When the Dáil banned fracking TDs promised to return to the issue of offshore drilling. Supporting this bill is a way to fulfil that promise.”