Scotland ‘could lose 8.5% in GDP’ after Brexit, committee hears 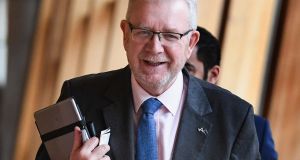 Britain’s exit from the European Union could lead to a loss of 8.5 per cent in GDP in Scotland within 12 years, or the equivalent of £2,300 per individual, a member of the Scottish Parliament has told an Oireachtas committee.

Michael Russell, the minister for UK negotiations on Scotland’s place in Europe, was before the Oireachtas Joint Committee on European Union Affairs on Wednesday to discuss the potential impact of Brexit on relationships between these islands.

Mr Russell reminded the members that Scotland had voted overwhelmingly to remain in the EU.

“Moreover, current polls show that there would be an even bigger majority were the referendum to be held again,” he said.

“Like our Irish neighbours, we have been placed into an unwanted situation not of our making.”

He said there were two interconnected sets of negotiations under way. One was the ongoing UK-EU negotiations on the UK’s exit.

“The other, less well known to you, is the intra-UK negotiations on a joined-up UK approach to the key exit issues, and on the implications of Brexit for the devolution settlements,” he said.

Mr Russell welcomed the principles agreed on phase one of the negotiations in December.

“We have always been careful to say and do nothing that would impede such an outcome, and we are particularly mindful of the importance of ensuring that the progress to peace made in the North is not jeopardised in any way by either governmental action or careless talk,” he added.

Mr Russell said it was imperative that the UK’s exit did not undermine the progress seen over the last 20 years of the Belfast Agreement .

“We regret the continued ambiguity from the UK government on many of these matters and the constant appeasement of the hard-right, ideological Brexiteers.

“But we welcome the UK government’s guarantee that there will be no such hard Border on this island. That must be delivered and therefore we will watch with interest to see how that happens, especially after the Downing Street pronouncement on the Customs Union this week.”

Mr Russell said the Scottish government had closely analysed the potential impact and had just last month published a report that presented the potential implications for Scotland’s economy if the UK finally exited the European Union.

The evidence clearly demonstrated that “in any scenario short of full EU membership”, Brexit would “significantly weaken our economy and will result in slower economic growth and lower incomes compared to remaining in the EU”.

“For example, we estimate that a hard, World Trade Organisation-rules Brexit could lead to a loss of 8.5 per cent of GDP in Scotland by 2030 – equivalent to £2,300 per individual.”

Mr Russell said the report concluded that the only acceptable alternative to EU membership was membership of the Single Market and the Customs Union, though that would also result in some economic damage.

It was his opinion that the situation had been a “constitutional crisis” for the past year and that it was just getting worse.

He did not expect there would be “much clarity” from the British government on the final Brexit deal, he said.

It might well be that at the end of the process there would have to be a vote by people in Scotland or people across the UK, and there were a number of proposals for a second referendum – a concept “not unknown in this country”.