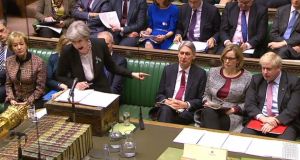 The Government fears that patience with the UK is running out in EU capitals and expects difficulties translating December’s political guarantees on the Irish Border into a legally binding agreement in talks over the coming weeks.

British government and EU officials are seeking to finalise a legal agreement on the terms of the British withdrawal before talks begin on the future trading relationship after the March summit.

However, Ministers and senior officials in Dublin are increasingly gloomy about the prospects for the talks, with senior sources citing that the continuing lack of a clear British government position is exhausting the tolerance of other EU governments.

On Wednesday, British prime minister Theresa May chaired a cabinet meeting which discussed the British position, but sources in London said they expected no decisive moves on the British government position.

Senior sources in Dublin and Brussels point to the contradiction in the British government’s stated positions.

While London has pledged to maintain a soft border in Ireland, if necessary by maintaining the same rules on either side of the Border, the EU believes this is incompatible with the UK’s stated desire to leave the single market and the customs union in order to negotiate trade deals with other countries.

“The British positions are irreconcilable,” said a senior source in Dublin. “And we have reached the point where fudging that is no longer tenable.”

The European Commission is likely to propose wording in the coming weeks for the legal agreement giving force to the political declarations about the Border made by the British government in advance of last December’s European summit. However, putting these in a legal text is likely to be difficult for the British government to agree to, sources say.

“It’s not the case that the EU is struggling to come up with a legal text. The struggle will be to agree it with the British,” according to a person familiar with the process.

The December agreement stipulated that in the event there was no agreement between the UK and the EU, the British would propose solutions to the problem of keeping the status quo on the Border.

If these were not agreed, the British said, then the UK would “maintain full alignment with those rules of the internal market and the customs union which, now or in the future, support North-South co-operation, the all-island economy and the protection of the 1998 agreement.”

Officials expect that the commission draft will propose that in the event of no agreement, a combination of single market and customs unions rules should apply to Northern Ireland.

“The commission will propose something that enables Northern Ireland to function as if it was still part of the EU. That’ll be difficult for the British,” one source familiar with discussions in Brussels said.

The Irish Government is also concerned that EU sentiment towards Britain is hardening, risking a total breakdown of the Brexit talks. “The British are seeking latitude and it just isn’t there,” said one informed source.