Minister challenges Opposition on safeguards they would abandon for reduced cost 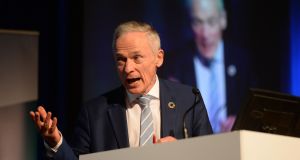 Minister for Communications Richard Bruton said the Eir offer to provide the service more cheaply “by abandoning all of the protections that were included, namely, the clawbacks, penalty clauses, performance requirements, distinct governance and upfront capital”. Photograph: Dara Mac Donaill

Telecoms company Eir would “jettison essential conditions” to protect the State and rural users if its offer to provide the national broadband plan was granted, the Dáil has heard.

Minister for Communications Richard Bruton said the Eir offer to provide the service more cheaply than its original €2.7 billion offer in the tender process, was “by abandoning all of the protections that were included, namely, the clawbacks, penalty clauses, performance requirements, distinct governance and upfront capital”.

He then challenged Fianna Fáil and Sinn Féin to indicate which of those essential conditions they would jettison from the original tender process for such an offer.

The opposition parties have taken issue with the Department of Communications over its engagement with Eir after the company caused consternation when its chief executive claimed they could provide high speed broadband to 540,000 properties for €1 billion, less than a third of the €2.7 billion tender process price.

Eir wrote to the department suggesting it could deliver the plan to provide broadband to 540,000 homes and businesses for between €512 million and €1.5 billion if certain changes were made to the structure of the programme.

During communications questions in the Dáil Fianna Fáil communications spokesman Timmy Dooley called on the Minister to accept that the current tender process was no longer fit for purpose and there was a need for further engagement on the Eir proposal.

But a clearly irked Mr Bruton insisted “there has been ample engagement with Eir around its concerns” on the tender process.

He said Eir wanted to get rid of obligation on financial commitments to deliver the project; state aid governance guarantees that any money provided to the company was used exactly for the purposes that it was intended; and “penalties and performance clawbacks in the event that the company did not deliver and that every home would have 100 per cent delivery of high-speed, future-proofed broadband”.

Sinn Féin spokesman Brian Stanley claimed the process had been “banjaxed” because Eir was allowed to cherry-pick in 2017 when it took on provision of service to 300,000 users and that made it more expensive to service the remaining 540,000 premises.

He said the costs had also risen because the State was going with a bidder “that has no infrastructure and does not own poles or a yard of ducting in the State”.

Mr Stanley warned the Minister that under the current process “the sharks are lined up to bite” but Mr Bruton said “the very protections the Deputy seeks to avoid the so-called sharks are the ones it is proposed will be abandoned in order to get a price that is sometimes quoted as €500 million, sometimes €1 billion and sometimes €1.5 billion”.