Decision on future of RTÉ orchestras due ‘within weeks’ 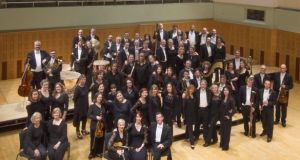 Decisions on the future of the RTÉ orchestras are expected to be made within the next few weeks, according to Minister for Culture Josepha Madigan.

The Minister re-affirmed her acceptance and that of Minister for Communications Denis Naughten of the review conducted for RTÉ which concluded that the broadcaster cannot fund two orchestras at the same time.

The review, conducted by an outside agency funded by the broadcaster, looked at the RTÉ National Symphony Orchestra and the RTÉ Concert Orchestra and recommended that the symphony orchestra be separated from the national broadcaster.

He pointed out that the 2009 Broadcasting Act stated that it was a statutory objective of RTÉ to establish and maintain orchestras, and he said he was emphasising the plural.

“If that is the view when will we see the legislation to implement that decision,” he said.

Ms Madigan told him the two departments were undertaking the “necessary evaluations”.

“We need to look at the governance structure and the legal requirements,” she said. She said they also needed to consider the transfer of employment.

“We hope to expedite it with our officials and be able to report shortly on that,” she said, before adding, “hopefully within the next few weeks”.

The report by former BBC radio executive Helen Boaden concluded that if funding was not made available, the RTÉ National Symphony Orchestra would close in a worst-case scenario.

The two orchestras cost €17.2 million a year, of which 82 per cent comes from either the licence fee or RTÉ commercial revenue.

Ms Boaden recommends the symphony orchestra be funded directly by the Government at the cost of €4 million and the redeveloped National Concert Hall should be its home from 2022.

RTÉ would still make a contribution for broadcast rights.