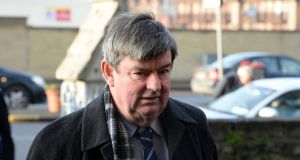 The Government has agreed to appoint Mr Justice George Birmingham as president of the Court of Appeal.

He is a former Fine Gael TD and Minister of State and was formerly the president of the Association of Judges of Ireland.

Meanwhile, the former chairman of the Planning Tribunal Mr Justice Alan Mahon will step down from his position on the Court of Appeal to take the new role of Ombudsman for the Defence Forces.

Mr Birmingham’s appointment was agreed despite Minister for Transport Shane Ross and the Independent Alliance threatening to block judicial appointments until the Judicial Appointments Bill was passed.

The Cabinet recently approved 50 amendments to the Bill to be introduced when it returns to the Dáil after it was already heavily amended at committee stage.

However, it is not clear if there is a Dáil majority to pass the Government amendments.

Mr Ross has frequently criticised the system of appointments for judges as being tainted by “cronyism” and by politicians appointing “their friends” to the bench.