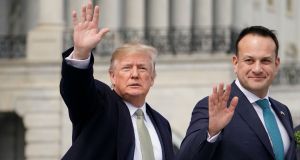 US president Donald Trump and Taoiseach Leo Varadkar have been selected among Time magazine’s 100 most influential people for 2018. Photograph: AFP/Getty Images.

Taoiseach Leo Varadkar has been selected as one of Time magazine’s 100 most influential people for 2018 alongside North Korean leader Kim Jong-un, tennis star Roger Federer and rapper Cardi B.

The top 100 includes figures from the worlds of politics, sports, film, music and social society.

Mr Varadkar is listed among global figures including US president Donald Trump; the actress and soon to be British royal, Meghan Markle; singer Jennifer Lopez; and athletes including US snowboarder Chloe Kim and NFL player J.J. Watt.

The magazine says its list is not merely a measure of power but is “a designation of individuals whose time, in our estimation, is now”.

Mr Varadkar’s entry on the list was written by Sunday Independent journalist Philip Ryan, who co-wrote the book Leo Varadkar – a Very Modern Taoiseach with his former colleague Niall O’Connor.

This year’s list includes record number of women and a record 45 of those selected are under 40 years of age.

Mr Varadkar (39) is described as being a symbolof how much Ireland has changed over the past 25 years.

“Twenty-five years on, Ireland is a very different place—symbolised by the rise of its new leader, Leo Varadkar. The openly gay son of an Indian immigrant, Varadkar decided to come out publicly in the run-up to the world’s first marriage-equality referendum. Today the once anti-abortion politician is campaigning to significantly liberalise the country’s abortion laws,” reads the entry.

It also highlights Mr Varadkar’s career as Taoiseach to date: “Varadkar is now at the centre of EU negotiations on Brexit, which could have a devastating impact on Ireland’s peace and prosperity.

“He also faces a major housing and homelessness crisis. The country’s youngest-ever Taoiseach will be judged on how he guides his nation through these challenges.”

Mr Varadkar featured on the cover of Time last year following an an interview with the magazine, entitled ‘A Portrait of the Prime Minister As a Young Man’, in which he discussed Brexit, his penchant for socks and the controversial phone call he received from Mr Trump about a planning issue in Co Clare while he was minister for tourism.