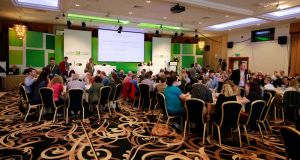 Members of the Citizens’ Assembly meeting to examine the topic of the Eighth Amendment last year. File photograph: Nick Bradshaw.

The Government will consider including school patronage as an issue for the Citizens’ Assembly to deal with, Taoiseach Leo Varadkar has said.

The assembly could look at a number of issues in the future, he told Labour leader Brendan Howlin.

He added that the Cabinet had discussed asking a new assembly to look at the wider issues of gender equality and “to come up with a set of proposals to allow us to follow through in many ways on the result of the referendum and deliver equality between men and women in other areas”.

Mr Varadkar said there was work to be done on “the gender pay gap, greater equality in pensions and having far higher participation of women on company boards.

“For the first time, some 52 per cent of the people appointed to state boards last year were women, but when we look across the corporate sector, we see it is not replicated. Fewer than 20 per cent of the members of boards of listed corporations are women.”

Mr Howlin said the school patronage issue was “significant for many right now who want choice in the education they provide for their children. The Citizens’ Assembly model would be a very good way to have that debate and to allow all sides to have an input and be tested in an open way.”

The Taoiseach told him “it is certainly something the Minister for Education and I will consider”.

But he warned against the assumption “that everything these assemblies or conventions come up with will be approved by the people”.

He said they planned for a referendum next year on extending the right to vote in presidential elections to all Irish citizens, including those living in the North and across the world.

“We want to have a referendum on that at probably the same time as next year’s local and European elections.”