Instructions were issued for Project 2040 ads to be ‘clearly identified’ 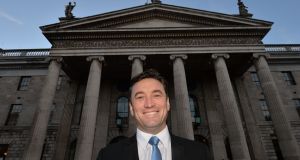 John Concannon, head of the strategic communications unit, told the media agency organising the advertorials they should read “in partnership with Ireland 2040, an initiative of the Government of Ireland”, according to documents released under the Freedom of Information Act. Photograph: Alan Betson

The head of the Government’s strategic communications unit (SCU), insisted paid-for content on the Ireland 2040 national development plan in newspapers should be “clearly identified” as sponsored content, several days before the controversy over the adverts erupted.

John Concannon, head of the SCU, told the media agency responsible for organising the advertorials they should read “in partnership with Ireland 2040, an initiative of the Government of Ireland” in documents released under the Freedom of Information (FoI) Act.

The Department of Taoiseach delayed releasing the documents, requested by a large number of journalists, for several weeks, before they were released on Friday evening, the day of the referendum on the Eighth Amendment.

The Ireland 2040 sponsored adverts were a major public relations disaster for the Government, and led to the decision to disband the SCU just months after it was set up by Taoiseach Leo Varadkar to streamline the Government’s communications strategy.

In February, the Ireland edition of the Times UK reported that the editors of several regional newspapers had been told to present the advertorials like news content. The ensuing controversy over the sponsored content dominated the political agenda for several weeks.

Jason Nebenzahl, the Irish managing director of PHD media, hired by the SCU to manage the promotion of the national development plan, told Mr Concannon the advertorials offered “exceptional value for money” on February 26th, the day the political controversy broke.

Mr Nebenzahl said media reports criticising the sponsored content placed in regional newspapers “misrepresent our initiative” and that the agency had stressed the content “needed to be clearly labelled as ‘in partnership with Project Ireland 2040, an initiative of the Government of Ireland’”.

“Some titles/stations made slight adjustments to fit within their own parameters, but this was the instruction. This ensured that readers/listeners knew that it was paid for content,” he said.

PHD media had hired Mediaforce, another advertising agency, to organise the advertorials among more than 30 regional newspapers. Mr Nebenzahl said they had made it clear there would be “no association” between the sponsored content and the regular news stories on the launch of the plan, where journalists “could write/say whatever they want”.

The national development plan was a major Government project launched in February, and set out a blueprint of major capital projects over the next 20 years. “Our only ask for the partnership was that the facts of the development plan were covered.”

Fianna Fáil TD Lisa Chambers said she was “shocked” the department had chosen the day of the referendum to release the documents. “What I infer from this is they are trying to bury any news about what was a very controversial spin unit in the back pages,” she said. “They would want to think people are stupid to believe that this was just a coincidence.”

In late March, the Government decided to disband the SCU by July, and redeploy its 15 staff members across the Civil Service. The decision followed sustained pressure from Opposition TDs, and two reports prepared by the secretary general of the department Martin Fraser into the SCU.

Mr Fraser’s report concluded that the unit did not politicise the Ireland 2040 campaign or try to interfere in how newspaper’s presented the sponsored content, such as seeking to promote Fine Gael election candidates.