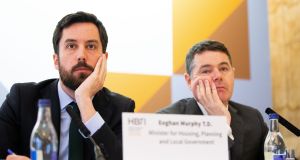 Ceann Comhairle Sean Ó Fearghaíl threatened to suspend Dáil proceedings after persistent heckling of Minister for Housing Eoghan Murphy as he attempted to answer questions about the escalating costs of the national children’s hospital.

Mr O Fearghaíl told TDs to “stop heckling the Minister” or he would be forced to suspend the House as he reminded them that the public was watching the proceedings and expected the House to conduct its business with propriety.

Pressure increased on Minister for Health Simon Harris and Minister for Finance Paschal Donohoe over the escalating crises in hospital costs, the nurses’ strike and the protest to be held on Wednesday afternoon by members of the National Association of General Practitioners (NAGP) outside Leinster House.

Angry opposition TDs highlighted the report in The Irish Times that senior Department of Health and HSE officials discussed potential overruns at the children’s hospital a year before Mr Harris said he had been informed of rising costs.

Fianna Fáil finance spokesman Michael McGrath said the elephant in the room was the lack of oversight of the hospital costs.

“Are we really being asked to believed that the Minister for Health was not kept informed” of the spiralling costs, he asked.

Mr McGrath said he could not imagine any company where a senior manager would not have informed the finance officer if there were such cost overruns.

He pointed to the intense negotiations to agree a budget and asked how Mr Harris who was informed in August of overruns “allowed a budget to be prepared” without informing that debate of the escalating costs.

Mr McGrath said the delays in informing Mr Donohoe raised further serious issues. “Does anyone talk to anyone in this Government?”

Mr Harris is currently before the Oireachtas health committee and Sinn Féin deputy leader Pearse Doherty who asked “when will the penny drop in your government that the Minister for Health is simply not up to the job”.

The health system was in a state of “absolute and utter chaos” and it was clear that Mr Harris and Mr Donohoe were “both out of their depth”, asleep at the wheel and kept out of the loop by their senior officials.

Mr Doherty said that the Minister never opened his mouth for three months about cost overruns “shows the dysfunctionality” at department and Ministerial level.

But Mr Murphy said Sinn Féin had problems with “due process” and that Mr Doherty should get the facts right “before you pull the trigger”.

Labour leader Brendan Howlin described the state of the GP sector as the next national crisis because of the level of vacancies in towns across the State.

He asked what the point was of the Government spending more money on health spending because it was so “spendthrift” with finances for the children’s hospital.

He said the tallest building in the world cost €1.7 billion what the children’s hospital was now expected to costs.

Mr Boyd Barrett said it “beggars belief” that the developer awarded the contract for the children’s hospital had had massive overruns in the Netherlands and the UK and the consultants PwC who were “going to get to the bottom of the scandal” of costs were the external auditors of the firm.

Mr Murphy said the Government shared the anger of the hospital overruns but it was the right decision to continue with the project.

He said the PWC would deliver their report next month and would show how the cost overruns happened.

Mr Murphy said the report would also suggest the measures that would be taken to control and reduce these costs.