Only 10% of those surveyed trust social media influencers 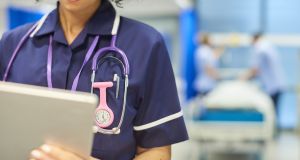 Nurses were the most trusted profession. File image: iStock

Nurses are the most trusted of all the professions, a survey by Ipsos MRBI, with 95 per cent of the public saying that they would trust them to tell the truth.

Nurses are followed by doctors (92 per cent), teachers (89 per cent, scientists (85 per cent), weather forecasters (84 per cent) and judges (83 per cent), in the most trusted professions, the Ipsos MRBI Trust in the Professions Survey finds.

Over 1000 respondents were asked if they would generally trust a list of professions to tell the truth or not.

Television news readers also scored highly at 75 per cent, though journalists fared less well at 46 per cent. This was an improvement of four per cent on the previous year’s figures, however.

Gardai have declined sharply by eight per cent on the previous year’s figure, though the level of trust in gardai is still quite high - almost three quarters (73 per cent) trust them to tell the truth.

Civil servants are at 67 per cent, while economists are at 63 per cent - just ahead of the “ordinary person in the street”, who is trusted by just 61 per cent of people.

EU leaders are the most trusted among politicians to tell the truth, with 43 per cent of people trusting them. Local councillors follow at 41 per cent, while government ministers are at 27 per cent and “politicians generally” are at 22 per cent.

That is better than advertising executives (18 per cent) and “social media influencers” at 10 per cent - but behind business leaders (38 per cent), estate agents (28 per cent) and bankers (27 per cent).