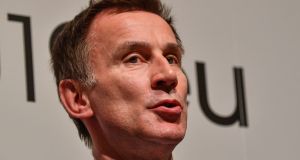 UK foreign secretary Jeremy Hunt says that even if Theresa May secures parliamentary approval for her Brexit deal, the deadline is too close to implement all legislation required. Photograph: Daniel Mihailescu/ AFP/Getty Images

Britain moved closer to postponing Brexit on Thursday after one of Theresa May’s most senior ministers, and a leading Conservative backbencher said she may have to seek an extension of the article 50 deadline.

Foreign secretary Jeremy Hunt said that even if the prime minister wins parliamentary approval for a Brexit deal in the next few weeks, it could be impossible to pass implementation legislation before the scheduled exit date on March 29th.

“I think that depends on how long this process takes. I think it is true that if we ended up approving a deal in the days before the 29th March, then we might need some extra time to pass critical legislation. But if we are able to make progress sooner then, that might not be necessary. We can’t know at this stage exactly which of those scenarios would happen,” he told the BBC.

Graham Brady, chairman of the 1922 committee of Conservative backbenchers, said he could countenance a delay to Brexit if a deal had already been agreed with the EU.

“Once we’ve reached an agreement and we know the terms on which we’re leaving, if we decide that we need another two weeks in order to finish the necessary legislation through parliament, I don’t think anybody’s going to be too worked up about that, because we will have made a decision,” he said.

MPs on Tuesday backed an amendment endorsing Mrs May’s Brexit deal on condition that the Northern Ireland backstop should be replaced by “alternative measures” to avoid a hard Border.

Labour MPs complained on Thursday that the prime minister was seeking to bribe them to support her deal by promising more community funding for some Labour constituencies that voted Leave in 2016.

Wes Streeting, a Labour MP who supports a second referendum on Brexit, said leaving the EU would make the communities targeted for extra funds poorer in the long run and that hardcore Brexiteers would oppose such funding.

“Their real agenda is to slash workers’ rights, to weaken trade unions and to open up our public services to untrammelled market forces. They are fully paid-up members of the Donald Trump fan club and committed enemies of any social dimension in market regulation and service provision,” he said.

“For Labour MPs to align themselves with the likes of Boris Johnson, Iain Duncan Smith and Priti Patel on Brexit would be a mistake that would rank alongside Ramsay MacDonald’s 1931 creation of a ‘national’ government. It would never be forgiven and never be forgivable.”

The four parties in Northern Ireland opposed to Brexit – Sinn Féin, the SDLP, Alliance and the Greens – said in a joint statement on Thursday that the backstop was an essential insurance policy to prevent a hard Border.

“While it may never need to be deployed, the backstop is the guarantee in all circumstances that no hard border will be re-established on this island. Prime minister Theresa May and her government in their attempts to abandon the ‘backstop’ have demonstrated an enormous act of bad faith. Abandoning the backstop would put at real risk the interests, rights and entitlements of the citizens, households, businesses and the Good Friday Agreement endorsed overwhelmingly in 1998,” they said.