Move to increase price of cheapest, strongest drink made before referendum, Stormont crisis 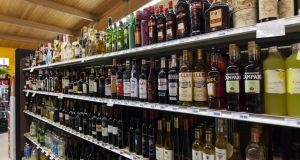 The Bill provides for detailed health warnings on labels including links to cancer and measures to segregate alcohol from other products in shops. Photograph: iStock

The introduction of minimum unit pricing for alcohol could be delayed because of Brexit and the failure to re-establish the Northern Ireland Executive, the Dáil has heard.

The Government hoped to introduce the measure at the same time as in the North to ensure the same price per unit of alcohol on both sides of the border.

This form of pricing increases the cost of the cheapest and strongest alcohol by setting a floor price below which drink cannot be sold.

It is estimated that the introduction of a minimum price per unit of alcohol will cut consumption among the heaviest drinkers by 15 per cent.

But Minister of State for Health Catherine Byrne said “we are all aware of the difficulties facing Northern Ireland, not only in terms of restarting its administration but also the possible impacts of Brexit”.

Responding at the end of the second stage or introductory Dáil debate on the Public Health (Alcohol) Bill, Ms Byrne said Brexit and the difficulties in restarting the North’s Administration “were not envisaged at the time of the Government decision therefore we will need to reflect further at the enactment of the Bill before deciding on the timing of the commencement of this provision”.

The legislation was first introduced in the Seanad in December 2015, six months before the UK referendum on EU membership.

The Bill provides for a series of measures to reduce harmful and binge drinking including minimum unit pricing, restrictions on advertising and promotion of alcohol including a broadcasting watershed.

The Bill also provides for detailed health warnings on labels including links to cancer and measures to segregate alcohol from other products in shops, petrol stations and supermarkets.

Ms Byrne pointed out that Scotland will introduce minimum unit pricing in May this year at the end of lengthy legal challenge by the Scotch Whisky Association. Six years after legislation was introduced it was adjudicated on by the EU Court of Justice, which ruled in favour of minimum unit pricing as a “proportionate and appropriate response for the protection of human life and health”.

It was then appealed to the UK Supreme Court which unanimously supported the EU decision.

The Minister also said it would not be an offence to sell Irish-produced alcohol outside the State without health warning labels. “It is an offence only if the product is sold in the State.”

She rejected calls for such warning labels - which must detail ingredients, calories, sugar content and links to cancer - not to be included on alcohol sold at Irish airports.

“I don’t see why customers in airport shops should be prevented from knowing how many calories are in the product they are buying, how much alcohol is in it or what health risks are associated with it.”

The issue has been referred to the European Commission because of the amendments made to the Bill in the Seanad which require the links with cancer to be stipulated on all products and on advertising.

Ms Byrne noted that EU Commissioner for health and food safety Vytenis Andriukaitis “has expressed public support for the Bill”.

Fianna Fáil TD James Browne who supported the Bill said however that it did not absolve the Government for its “failure to put in place appropriate supports for those suffering from dual diagnosis of substance addiction and mental health issues”.

The Wexford TD said that “if this is a health initiative it must include mental health”.

He said mental health issues most noticeably affected young people. “Alcohol changes serotonin levels and neurotransmitters in the human brain and these changes are intensified in young people whose brains are still developing.”

As a result young people suffered more negative mental health consequences from alcohol than adults did.

Mr Browne noted a World Health Organisation estimate that the risk of suicide increases eightfold when a person is under the influence of alcohol.

“Just recently a UCC study of 181 suicides reported that 80 per cent of the people had been under the influence of alcohol at the time of death.”

The Bill now goes to the Health committee for debate on amendments.