Harris said he does not doubt the sincerity of people opposed to removing the Eighth Amendment, but that retaining it would not stop abortion

Simon Harris has said he would seek approval in a few weeks for a series of measures to further support women and improve access to counselling, contraception and perinatal care. Video: Oireachtas TV 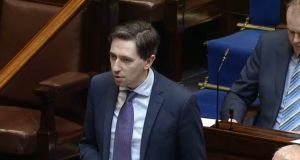 Women’s health and lives cannot be dealt with “in a few rigid lines in bunreacht na hÉireann”, Minister for Health Simon Harris has told the Dáil. 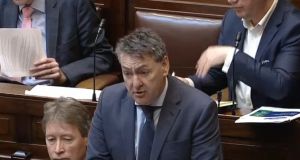 Fianna Fáil health spokesman Billy Kelleher said people had expressed huge compassion for women in cases of rape, fatal foetal abnormality and incest but “unless we change Article 43.3.3 that compassion can only remain compassion”.

Proposals are being drawn up on “the nature and scope’’ of introducing a free contraceptive service, Minister for Health Simon Harris has said.

He said he would seek approval in a few weeks for a series of measures to further support women and improve access to counselling, contraception and perinatal care.

“If our underlying principle is that abortion should be safe, legal and rare, then we must do all we can to reduce the number of crisis pregnancies and to support women in every way,’’ Mr Harris added.

The Minister was introducing in the Dáil on Friday the Thirty-Sixth Amendment of the Constitution Bill 2018, paving the way for the abortion referendum.

“The Thirty-sixth Amendment of the Constitution Bill is not just about giving the people of Ireland a say on how they believe we should now proceed,” Mr Harris said.

It was about “giving the people of Ireland a say on how Ireland treats women”.

“It is about how our country treats our sisters, our wives, mothers, daughters, our friends and colleagues at a time when they most need our care.”

He did not doubt the sincerity of people opposed to removing the Eighth Amendment, but said retaining the amendment would not stop abortion. If that was its intention it did not succeed, but only contributed to pain and suffering.

He told about 50 TDs present in the chamber for the debate, including four Cabinet members, that “we must think of all the thousands of women from every county in Ireland who have made those lonely journeys to other countries at times of crisis in their lives.

“We think of the women who now face these crises alone and unsafe with pills purchased online, rather than with the safe medical care they need. That will be a reality for at least three women today. I have heard from doctors that women are being harmed or at risk as I speak by taking unregulated abortion pills.”

He called on TDs to think of the nine women in airports today or the three women taking abortion pills in their homes today.

Mr Harris said as TDs sat in comfortable seats in the chamber, in a somewhat abstract environment, somewhere else, they could imagine, were the ports and airports, whether in Cork, Waterford, Dublin and Shannon, where a woman they could know was waiting to go to another country.

“She might be sitting quietly next to the hen party, the businessman or woman, the honeymooners, seeming to be on a similar journey,’’ he added.

“But she’s not. Even if she might have a girlfriend or a partner with her, her journey is a lonely one.’’

Mr Harris said he was introducing the Bill mindful of the impact of the Eighth Amendment over the 35 years since its insertion.

“We stand here knowing the tragedy which befell Savita Halappanavar and her family,’’ he added.

The Minister said “I cannot live any longer in denial of the realities of the women travelling every day from every county in the country or buying that pill on the Internet.

“I don’t believe Irish people want their country to be a place that is cold, uncaring and neglectful towards women in crisis but that has been the legacy of the Eighth Amendment. And if we want to change things, we have to make the fundamental change of removing it from our Constitution.”

Fianna Fáil health spokesman Billy Kelleher said people had expressed huge compassion for women in cases of rape, fatal foetal abnormality and incest but “unless we change Article 43.3.3 that compassion can only remain compassion”.

He said that “some people have said ‘can we trust politicians if we amend Article 43.3.3’. The corollary of that is that basically they’re saying we can’t trust women.”

He said that if the Eighth Amendment was not repealed, what would happen in the case of “a girl raped and impregnated by her father. The State cannot do anything. The problem must be sent off to England. I find that quite offensive.”

He asked: “Do we say to a woman who has been diagnosed with cervical cancer that she can’t have treatment? She will have to go to England for a termination and then come back to have treatment.”

The Cork North-Central TD said that “in the case of a vile rape, if a woman self medicates she is potentially criminalised and could get a custodial sentence of 14 years, but her rapist might only get a conviction of eight years”.

That is “what we are saying about the legislation”.

He said “the Eighth Amendment has done a great disservice. Terminations are taking place in bathrooms in this country,” three every day.

Mr Kelleher said he was his party’s health spokesman but was speaking in a personal capacity. Fianna Fáil TDs are allowed a free vote on the issue. But he said he “strongly passionately” believed that “we must legislate and the only way we can legislate is by repealing article 43.3.3”.

The 12 week limit was not randomly chosen but was in line with other EU countries, Mr Kelleher said, as he listed over a dozen countries including Belgium, Slovakia, Czech Republic and France, where it had been 10 weeks but was moved to 12 weeks in 2001.