Why there is no easy answer to conundrum facing Ireland

Britain will not resolve the question of the Irish border after Brexit until it has also agreed the outline of a trade deal with the European Union, the country's International Trade Minister Liam Fox said on Sunday (November 26). 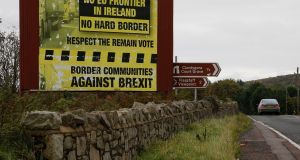 Border Communities against Brexit signage on the outskirts of Newry in Northern Ireland. Photograph: Nick Bradshaw.

Tensions are rising between Dublin and London on the issue of the Irish Border ahead of the December summit. The EU side has to judge that “sufficient progress” has been made on the issue – and on some others – to allow the Brexit talks to progress to discussing EU/UK trade. But there is no easy solution.

Here are the various ways forward which have been suggested and the political and practical problems they involve.

This would mean there would be no need for an Irish Border and free trade could continue between the EU and UK. It would be the ideal solution for Ireland. The key EU arrangements allowing for free trade across the EU are the Customs Union – which allows free trade in goods – and the Single Market – which agrees common standards and rules.

The UK has insisted that it will leave both the Single Market and the Customs Union as part of Brexit. It wants to do this so that it can escape from EU rules and regulations and the jurisdiction of the European Courts – and also so it can control the movement of people into the UK.Freedom of movement of people is central to the operation of the Single Market. Downing Street says there is no going back on this one and repeated this as recently as Monday.

2. The North stays in the EU trading bloc:

A recent EU negotiating paper suggested that a way forward was for the North to remain part of the EU trading system by ensuring that after Brexit there was “no emergence of regulatory divergence from those rules of the internal market and the customs union” between it and the Republic. This would give the North a kind of special economic status post-Brexit and put it in a different position to the rest of the UK.This would mean no Border on the island of Ireland.

The British government and the DUP have both ruled this out and DUP leader Arlene Foster has written to all the EU leaders on Monday insisting it cannot happen. There is huge sensitivity in London and Belfast to different rules applying in the North to the rest of the UK and to the idea of any kind of “special status.” And it would also mean controls on goods would be needed at ports and airports between Britain and the North. This is because the Irish Sea would then become effectively the border between Britain and the EU.

Writing in today’s Financial Times, Irishman and former Unilever chairman Niall FitzGerald suggested the way forward was a new trade deal between the EU and UK. A proposals along these lines was published on Monday by the British Irish Chamber of Commerce, of which FitzGerald is a patron. Under this proposal, Britain would leave the EU trading bloc, but a new customs deal would be made between the EU and UK. This would effectively be a new customs union between the two sides. Britain would also agree to maintain many of the EU rules and regulations – the bits of the Single Market which facilitate free trade. FitzGerald proposes that the EU would agree that Britain would be allowed to control freedom of movement of people. However Britain would agree to put the same tariffs on goods coming in from third countries as applies in the EU and to apply the same standards.

This is an attempt to recreate the existing trading arrangements as closely as possible, while ending the UK’s obligation to comply with EU rules on the freedom of movement of citizens. It would only eliminate trade borders -– including in Ireland - completely if it covered pretty much all areas of commerce. The chamber document refers to a deal between the EU and Turkey as a template, though it excludes some products and so checks are still required.

The EU side would have to give ground here if this kind of deal was to happen, allowing Britain to retain many of the EU trading benefits, while controlling freedom of movement. And Britain would have to give up its goal of negotiating its own trade deals with third countries after Brexit and setting its own rules for the entry of goods into its market.This would be a big concession from the Brexit lobby. Other half-way houses plans have also been suggested, but they all run into similar kinds of issues.

4. Technology and cooperation are used to create a “frictionless” Border

Britain has put forward ideas for using new procedures and technology to make a new Irish Border as free as possible after it leaves the EU trading bloc. For example, big traders might get pre-clearance for goods movements, there might be special allowances for smaller operators and an attempt to keep regulations the same in key areas like agriculture.

Former Taoiseach Bertie Ahern, in a UK media interview on Monday, said the most likely option was to “make technology work in most cases and to throw a blind eye to those areas that can’t come in within technology.” His comments won’t have been welcomed by the Government here.

This would mean the return of a trade Border on the island, albeit that there is argument about how visible or intrusive it would be. This has been ruled out by the Irish Government, which has pointed to the political dangers of reimposing a Border and the threat it could pose to the Peace Process. It is also far from clear how some checks on good movements could be avoided if the UK does leave the EU trading bloc. Under rules set by the World Trade Organisation, both Britain and the EU would be obliged to have sufficient controls at their borders on goods movements. This route would also seem to provide new opportunities for smuggling and criminality.

5. The “we’ll work it out in the second phase of talks” solution

Britain has been arguing that the Border issue cannot be sorted until the talks move on to discuss trading arrangements. However the EU side has insisted that sufficient progress must be made on Irish issues before the talks progress . Ireland fears that if it does not use its negotiating position now, the return of the Border could become inevitable. It has sought a written assurance from the UK on the Border issue and specifically on rules and regulations staying the same on both sides of the Border – and says it has the support of the other 26 EU members. Britain has so far resisted giving such a written guarantee.

The problem is that for a solution to be reached by December, someone must back down. Either Dublin signs up for some kind of fudge – or some kind of a non-specific commitment that the issue will be dealt with in the second phase – or London puts its name to a deal which means that at least the North must effectively remain subject to EU trading rules and regulations. So we are heading for a clash and the old political way forward – finding a fudge in the middle ground to allow things to progress – looks difficult..