Tech companies have focused on clamping down on politically motivated disinformation. Facebook has a label for “disputed” stories and has introduced some independent fact-checking processes. Photograph: Loic Venance/AFP/Getty

Is Ireland ready for its first post-truth referendum campaign? In the 20 months since this country’s last election, democracies around the world have been rocked by allegations of online manipulation, disinformation and foreign meddling.

Last Monday, UK prime minister Theresa May accused the Russian government of “deploying its state-run media organisations to plant fake stories and photoshopped images in an attempt to sow discord in the West and undermine our institutions”.

In a belated response to the rising storm over “fake news”, Google has asked the Federal Elections Commission (FEC) in the US to bring online advertising into line with existing legislation, which bans foreign governments or their proxies from buying election ads in traditional print or broadcast media. Facebook has conceded that it will have to be more transparent to users about who is paying for ads they see on its platform.

The two companies, which between them dominate the global online advertising market, have admitted that Russian money paid for tens of thousands of dollars worth of ads online before last year’s US election. Twitter has now banned ads from Russian media companies RT and Sputnik because of their interference.

The international focus may currently be on Russia, but the broader question of how democracies can protect themselves against interference from outside their borders is increasingly pressing.

Legislation in Ireland lags well behind a bewildering new reality in which open, hyper-connected social platforms with unprecedented access to masses of personal data can be used to mount sophisticated campaigns of misinformation which prey on people’s uncertainties and fears.

In their response to the increasing concern about what is happening on their platforms, tech companies have focused on better regulation of advertising and on clamping down on politically motivated disinformation. The results so far have not been particularly impressive, although Facebook now has a label for “disputed” stories and has introduced some independent fact-checking processes. 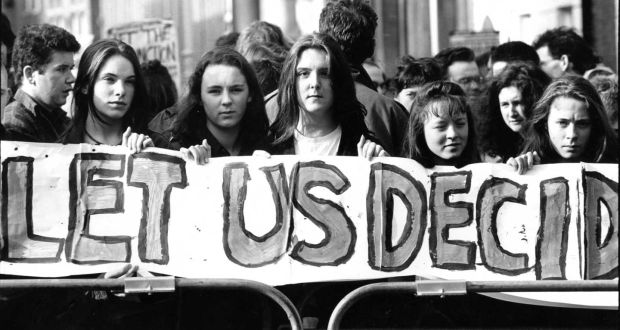 But the problems run deeper than that; an article in last week’s New York Times pointed to a “vast amount of misinformation and unevidenced stories about reproductive rights, science and health”.

The newspaper reported that the most-shared article on Facebook in the US about abortion last year had the headline “Before Applauding Hillary’s Abortion Remarks, Know the One Fact She Ignored” and came from a site called Mad World News. It said articles about abortion from news outlets like the New York Times and the Washington Post were not as popular as content from the anti-abortion site LifeNews.com.

Abortion is a contentious issue which transcends borders and mobilises committed partisans on both sides. Facebook’s algorithms give added prominence to content which elicits strong emotional reactions. This inevitably feeds into people’s existing beliefs, reinforcing filter bubbles and narrowing the space for reasoned debate.

The New York Times article went on to suggest that Ireland’s impending referendum will be the next potential battleground for US-based anti-abortion sites. A referendum will be held in 2018 on the Eighth Amendment to the Constitution, which places an equal right to life on the unborn child and the mother.

In its annual report this year, Sipo called on the Government to introduce legislation allowing greater transparency around the funding of referendum campaigns, including a new system for third-party bodies to register for the duration of a particular campaign.

In response to a query from The Irish Times, Sipo confirmed on Friday that it had not yet received a response from the Government to its recommendation, so Irish voters will not have full information on funding of the organisations campaigning in next year’s referendum.

A number of anti-abortion and pro-choice groups have already registered as third parties, and are therefore precluded from accepting donations from outside Ireland.

But there is nothing to prevent somebody outside the State buying Facebook ads in eastern Europe to target specific groups of voters in Ireland. The US election showed how powerful such campaigns can be, with messages tailored to specific demographic groups.

Equally, there is nothing to stop a fake news site in the US from pumping out material directed at the Irish electorate. Or to stop thousands of “bots” (fake social media accounts) being mobilised to amplify certain messages and make them seem more popular than they actually are. Unlike posters or newspaper ads, much of this material is invisible to anyone who hasn’t been directly targeted.

None of the remedies now under discussion in the US and Europe are likely to solve the problems which have arisen. But they may bring a measure of transparency and accountability which currently does not exist. For next year’s referendum campaign, though, even that will be too late.

Case against rail link from Athenry to Claremorris ‘fundamentally flawed’

Jon Rahm thanks Padraig Harrington for advice on handling adversity

Man arrested following fatal assault in Dublin 11:41
Gardaí: There is ‘absolute confusion’ around outdoor alcohol rules 10:03
In the News: Can we win the race against the Delta variant? 07:39
Audit criticises financial practices at Galway anti-poverty group 03:00
Up to 70% of prisoners suffer from personality disorders 02:00

1 Gardaí: There is ‘absolute confusion’ around outdoor alcohol rules