Frances Fitzgerald resigns in ‘national interest’ to avoid an election 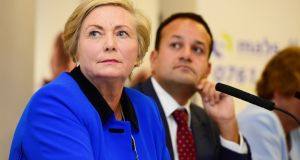 Tánaiste Frances Fitzgerald has stepped down due to the growing controversy over the handling of the Maurice McCabe case. Photograph: Cyril Byrne 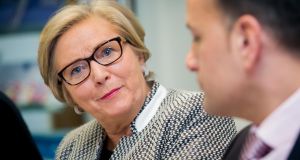 Tánaiste Frances Fitzgerald has stepped down due to the controversy over the handling of the Sgt Maurice McCabe case. Photograph: Collins

Tánaiste Frances Fitzgerald has resigned from Government in the “national interest”, hours ahead of a no-confidence motion in the Dáil threatened to bring down the Government.

Ms Fitzgerald told a Cabinet meeting on Tuesday she would be “vindicated” by the Disclosures Tribunal led by Mr Justice Peter Charleton, which is examining allegations of the smear campaign against Garda whistleblower Sgt Maurice McCabe.

The Tánaiste told her colleagues she believed she had done nothing wrong but she was resigning to avoid “an unwelcome and potentially destabilising general election”.

In a statement, she said: “It has been the greatest honour of my life to serve in Government, but I believe it is necessary to take this decision to avoid an unwelcome and potentially destabilising general election at this historically critical time.”

The Tánaiste said she has always sought to act with integrity and responsibility, and is now seeking to place “the national interest ahead of my own personal reputation”.

Ms Fitzgerald added: “I decided that my continuation in office risks destabilising that good work, and so I have decided to step down so that this work may continue and the country can be spared an unnecessary election.

“It will also allow me to vindicate my good name at the Charleton tribunal, without causing any further distraction to the work of the government.

“I have always believed in due process and I believe that in the current situation that is becoming increasingly difficult for me. I acted correctly in difficult circumstances and, in fact, did everything that I could to support the search for truth and protect whistleblowers.”

Earlier on Tuesday, the Attorney General Séamus Wolfe gave a presentation to the Cabinet insisting it would be “inappropriate and improper” for Ms Fitzgerald to have intervened when she received the emails in 2015.

Mr Varadkar accepted her resignation at the end of the Cabinet meeting and telephoned the Fianna Fáil leader Micheál Martin to advise him of the development.

In a statement in the Dáil, Mr Varadkar said she was leaving office without getting a full and fair hearing but the work of Government must not be interrupted.

“It is my strong view that a good woman is leaving office without getting a full and fair hearing,” he said. “Frances has been an exemplary member of Government and a loyal colleague.”

He also announced that he was launching an external inquiry into how the “dysfunctional” Department of Justice responded to the emails about Sgt McCabe.

The Taoiseach will now have to appoint a new tánaiste, which is likely to be Minister for Foreign Affairs Simon Coveney, and a new Minister for Business, Enterprise and Innovation.

“In future, he will ensure, as will his secretary general, that questions are properly answered,” Mr Varadkar added.

On Tuesday evening, Secretary General of the Department of Justice Noel Waters has confirmed his departure from his position.

Mr Waters was due to resign in February but confirmed he will leave the role immediately. This was a decision he had made on his own, he added.

Meanwhile, Fine Gael sources said the resignation of Ms Fitzgerald had handed the Fianna Fáil leader a “significant win” and had damaged the Taoiseach.

Speaking at his frontbench meeting after the resignation was confirmed, Mr Martin thanked his party for their patience over a difficult few days.

He said the focus now needed to be on Brexit and supporting the Government’s stance during the talks scheduled for mid-December.

Ms Fitzgerald had been under intense political pressure in recent days over the handling of the case of Garda whistleblower Sgt McCabe.

However, even if the immediate threat of an election has been removed, the crisis has significantly weakened the Government and damaged trust between Fine Gael and Fianna Fáil, which supports the minority Government with a confidence-and-supply arrangement.

Ms Fitzgerald had insisted she was unaware of a legal strategy by former Garda commissioner Nóirín O’Sullivan in 2015 to question the integrity and credibility of Sgt McCabe at the O’Higgins commission, which was examining allegations of Garda malpractice.

It has now emerged she received three emails on two separate dates advising her of the approach by Ms O’Sullivan.

Fianna Fáil and Sinn Féin had been seeking the tánaiste’s resignation, and both tabled motions of no confidence in her, the first of which was due to have been heard at 8pm on Tuesday. Both have now been removed.

During the crisis Mr Varadkar stood by Ms Fitzgerald and offered her his full support.

Fine Gael Ministers reacted with fury on Monday night when it emerged Ms Fitzgerald had received three emails on two separate dates notifying her of the legal strategy pursued by Ms O’Sullivan against Sgt McCabe.

The Department of Justice emails show Ms Fitzgerald was repeatedly told in 2015 about an “aggressive” approach to undermine Sgt McCabe at the O’Higgins commission.

In two separate emails on July 4th, 2015, she was advised of media queries about the “aggressive” approach being adopted by the former Garda commissioner Nóirín O’Sullivan and advised how to respond if the media asked her about the matter. It was a senior Department of Justice official who described the approach as “aggressive”.

The emails reveal that a senior official suggested to Ms Fitzgerald that she should say that it would be “very unfair to Sgt McCabe” if she was to respond to queries about the commission.

This release of emails about the controversy undermined efforts to defuse the row between Fine Gael and Fianna Fáil over Ms Fitzgerald’s position.

Earlier on Tuesday, Independent Alliance members of Cabinet said they would be seeking “political accountability” from Ms Fitzgerald.

There had been no appetite from within Fine Gael for a general election on this matter, as they feared they would face an intense backlash from voters.