How will parties consult members on government formation amid Covid-19? 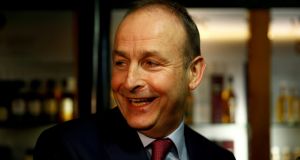 FF leader Micheál Martin introduced rules in 2012 which stipulate that a draft programme for government must be voted on at a special ardfheis. Photograph: Henry Nicholls

The Fianna Fáil executive, comprising about 80 people, can make a decision on whether the party enters government with Fine Gael if a special ard fheis cannot be held, party sources have confirmed.

Allowing the executive, or ard chomhairle, make the decision is “one option” being examined if a special ard fheis to ratify any programme for government cannot be held due to the coronavirus crisis.

As leader, Micheál Martin introduced new rules in 2012 which stipulate that a draft programme for government must be voted on at a special ard fheis. The party has about 18,000 members and each would be entitled to vote if they turned up at the ard fheis, with the result determined by a simple majority. A draft programme for government would also have to be passed by the parliamentary party.

Mr Martin on Thursday told RTÉ Radio’s Today with Seán O’Rourke that such an ard fheis to ratify a coalition deal with Fine Gael could be difficult.

“That presents challenges with Covid-19, we will be engaging and consulting with all levels of the party, and we’ve already been doing that.”

He also said he didn’t think a postal vote would be “feasible at this stage”, adding that party rules say there should be an ard fheis.

One well-placed source said: “The ard chomhairle, when the ard fheis is not in session, is the body of responsibility.”

The ard chomhairle has about 85 members representing constituencies, the parliamentary party, youth wing Ógra and councillors. A motion can be passed by a simple majority at the ard chomhairle but a move to change the rules must be carried by a two-thirds majority.

Fianna Fáil Limerick TD Niall Collins said the reaction so far by members to the framework document agreed with Fine Gael had been overwhelmingly positive.

“No matter what mechanism is chosen, I am confident party members will back the decision of the party leader and parliamentary party,” Mr Collins said.

Galway West TD Éamon Ó Cuív said members must be consulted, while acknowledging an ard fheis could not be held during the coronavirus crisis.

“Postal votes are common,” Mr Ó Cuív said, adding that the Labour Party recently held one to elect Alan Kelly as leader. “Where there is a will, there is a way.”

Taoiseach Leo Varadkar told the Fine Gael parliamentary party this week that his party would probably hold a postal vote to ratify any coalition deal. Fine Gael requires a special delegate conference to decide its participation in government or a confidence-and-supply-style arrangement.

The vote is also carried out on a weighted, electoral college basis. TDs, Senators and MEPs make up 50 per cent of the voting strength, followed by 25 per cent for constituency delegates, 15 per cent for councillors and 10 per cent for the executive council.