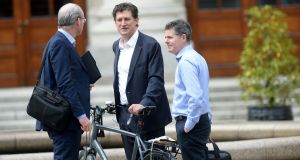 The leaders of Fianna Fáil, Fine Gael and the Greens are expected to formally sign off on a draft programme for government between their parties later on Monday.

The lengthy document - negotiated over more than a month of talks - outlines changes in key environmental and transport policies for the five-year term of an administration.

It addresses a number of policy areas of particular concern to the Green Party, including extra funding for public transport and cycling infrastructure, an increase in carbon tax and an acceleration of Ireland’s carbon emissions reduction to an average of 7 per cent a year to 2030.

Taoiseach Leo Varadkar, Micheál Martin of Fianna Fáil and Eamon Ryan of the Green Party were in talks in Government Buildings since 3.30pm on Sunday afternoon to hammer out some final unresolved issues including the pension age, Occupied Terrirtories Bill and indexation of taxes.

By late Sunday evening, the talks had been curtailed and were due to resume on Monday morning.

Fianna Fáil leader Micheál Martin said the three party leaders will meet on Monday morning and he was confident the final Programme for Government document would be fully signed off by then.

‘Good for the country’

The negotiating teams from each of the potential partners in a new coalition government met until the early hours of Sunday morning as they largely settled a new policy framework for next five years.

Once the party leaders formally sign off on the deal, it will then be subject to the approval of each of the wider party organisations.

“We did a lot of good work last night and we effectively have a text for a government with a need for the leaders to finalise a very small number of issues,” he said on his way into a party meeting.

“Negotiating teams have done their job. I think the text that will be going to the leaders today is good for the country and I hope and I am confident that the three leaders will be able to sell it within their parties and to the public.”

Minister for Health Simon Harris told RTÉ’s The Week in Politics programme it had been “a long intense five weeks of negotiation and it’s been a long 127 days since the general election, so I think it’s getting to a point now where we need to get on with it. It think the public want and need a government”.

Among the issues expected to be settled by the three leaders are pensions policy, Fine Gael’s desire for tax cuts at some point in the lifetime of the next government if economic circumstances allow, and social welfare policy. Another issue to be settled by the leaders is a mooted ban on imports from occupied territories.

Sources involved in the talks overnight however said that, on some of those issues, a “pathway” towards a solution had been worked on by the negotiating teams for the leaders.

Mr Martin, Mr Varadkar and Mr Ryan will be expected to agree and sign off on the wording of such policy areas in the new programme for government, with one source suggestion that the leaders had the most work to do in the areas of pensions and tax.

What has the Green party secured?

It is understood that it has been agreed that the carbon tax will rise to €100 a tonne by 2030 as requested by the Greens, and that the construction of fossil fuel infrastructure, including the planned liquefied natural gas (LNG) plant earmarked for the Shannon estuary area, will be halted - another key demand for the party. It has also secured its main policy aim of accelerating Ireland’s carbon emissions reduction to an average of 7 per cent a year to 2030.

The three negotiating teams agreed most of a programme for government this morning. A small number of issues have been left to the party leaders to decide later today. A lot of good stuff in there!

Further policy concessions to the Greens include the banning of further exploration of gas in the waters off Ireland and an annual spend of €360 million on walking and cycling infrastructure.

One of the main issues of contention in Saturday’s marathon talks session in Agriculture House in Dublin city centre was around transport policy but a deal was struck which will see future capital investment split on a 2:1 basis in favour of public transport over roads.

An annual spend of €360 million on walking and cycling infrastructure was also agreed. This €360 million spend will be allocated before the 2:1 split in favour of public transport.

The Greens have also secured the rollout of BusConnects in Cork, Galway Limerick and Waterford. The Dublin BusConnects plan, which aims to improve bus services in the capital, has proved controversial because of the changing of existing services and in some cases the removal of trees to create new bus lanes.

There will also be a significant expansion of offshore wind energy across the west coast, which Green Party figures say will massively benefit communities in the west of Ireland.

There will be an economic evaluation of high speed rail links between major cities and a tripling of local link bus services in rural Ireland.

Overseas Development Aid will be increased to 0.7 per cent of GDP and a floor will be put in place to ensure that the aid budget does not fall below the level of recent years in cash terms.

Those who opt for the retrofitting scheme will be able to pay for the work to their homes through utility bills. Sources suggested the scheme will be modelled on a pilot for a district heating project.

There will also be an emphasis on the microgeneration of electricity through greater use of solar panels and greater emphasis on waste and circular energy.

A new media division will also be established within govermment with responsibility for broadcast, print and online media. There will also be a review and reform of the defamation laws.

Fianna Fáil priorities in the document are said to include improved access to health services; affordable and social housing; a referendum on the right to housing; 10,000 apprenticeships; roads and transport projects; increased funding for agriculture; expanding a mooted a commission on taxation into a tax and social welfare commission; the announcement of education funding for third level to be announced next month; a united Ireland division within the Department of the Taoiseach;; a citizens’ assembly on drug use; an increase in the home carer tax credit; and increased regional development.

In housing, 50,000 social homes will be provided over the next five years, with an emphasis on new builds.

The Part V provision, under which developers must set aside 10 per cent of their projects for social housing, will be expanded to include affordable, although the exact level has not yet been set.

The current cap on the amount of money local authorities can spend on social housing developments will increase from €2 million to €6 million.

Fianna Fáil housing spokesman Darragh O’Brien said: “This is a radical plan on housing which will be transformative for the Irish housing sector. It will mean that young couples who are now renting will be able to get a home they can afford.”

It is understood a new scheme will seek to retrofit 500,000 homes by 2030 on a “aggregated” model - which means certain towns or areas will be retrofitted at the same time to achieve economies of scale.

And what about Fine Gael?

Fine Gael sources said the party’s election commitments which will be included in the government deal include increased homecare hours and a statutory homecare scheme; reduced prescription charges; a new carer’s strategy; an expansion of respite services; continued extension of free GP care for children and “more flexible childcare options”.

A new “Total Contributions Approach” for pensions is also said to be included to align “ a person’s contributory pension more closely with the contributions they make, including credited contributions, ensuring consideration for people who take time off work to care”.

Other Fine Gael measures said to be outstanding and not yet agreed include a jobs and stimulus package in July; a package for farmers to encourage sustainable use of land and protection of heritage; and a “new care deal for Ireland from cradle to grave” that improves care from childcare to old age.

Some sources suggested that the overwhelming majority of work has been completed on the policies contained in the programme for government.

It was suggested that a large amount of the work left to the leaders will be on an understanding of how the three party government will work - particularly with Fianna Fáil and Fine Gael as equal partners and with Micheál Martin and Leo Varadkar set to rotate the position of Taoiseach.

It is understood a second document on how the new government will function is also being worked on by the party leaders. This final drafting of this document will likely follow agreement on the programme.

If, as is widely anticipated, the deal is signed off by the leaders on Sunday, the final document will likely be sent to each of the respective parliamentary parties on Monday.

It is likely that meetings of Fianna Fáil, Fine Gael and Green parliamentary parties will take place then to discuss and assent to the deal. One of the key elements which will be watched out of those meetings will whether there is opposition to the deal from any TDs and senators in each party.

Sources in both Fianna Fáil and Fine Gael are increasingly confident that Catherine Martin, the Green Party deputy leader who is challenging Eamon Ryan to be leader, will back the deal, although Ms Martin has not said anything publicly.

Each party will also have to engage in a wide internal ratification process to approve the deal. Both Fianna Fáil and the Greens will hold a one member, one vote postal ballot of all their members.

After leaving the talks on Sunday morning, Green Party Dún Laoghaire TD Ossian Smyth, a member of his party’s negotiating team, tweeted shortly after 4.30am: “The three negotiating teams agreed most of a programme for government this morning. A small number of issues have been left to the party leaders to decide later today. A lot of good stuff in there!”

A negotiating team member from another party said: “There is nothing left for the negotiators. Across all sides there was a willingness to get it done.”